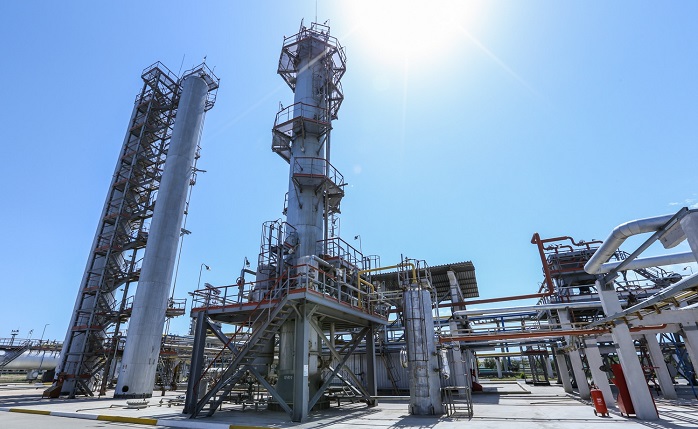 The State Oil Company of Azerbaijan plans to start production of automotive fuel in accordance with Euro-5 standards at the Baku refinery in 2022, SOCAR spokesman Ibrahim Ahmadov told Interfax.

“Currently, the modernization of the Baku oil refinery continues amid the coronavirus pandemic.

Restrictive measures introduced in all countries have a direct impact on industrial projects, as they impede the movement of specialists, goods and materials, and as a result, can lead to certain delays.

Despite this, the process of modernization of the plant is regulated. It is expected that the enterprise will start producing automobile fuel in accordance with Euro-5 standards in 2022,” Ahmedov said.

“The initial version of the project for reconstruction and modernization of the Baku Oil Refinery has been revised and is still being revised. According to some of our specialists, the goal of starting production of automotive fuel at the plant that meets Euro-5 environmental standards can be achieved at the turn of 2021-2022,” he added.

SOCAR expects to complete the reconstruction and modernization of the plant at the turn of 2024-2025.

As you can see, the modernization of the Baku oil refinery for Azerbaijan has become a long-term construction project. Although outside Azerbaijan (in Izmir, Turkey) SOCAR has completely built an oil refinery from scratch in a difficult geographic area in just 7 years (the construction period was about 4 years).

Moreover, it was a project of such a level that it had no analogues in the Mediterranean basin over the past 10 years. The processing capacity there is 10 million tons. And for these purposes, $ 6.3 billion was spent.

Why was it not possible to realize the new refinery in Azerbaijan as well?

Recall that by the end of 2014, the Azerbaijani government planned to completely withdraw two refineries from Baku (they are both located in the city itself, not the suburbs – ed.), That is, to dismantle them. Since May 2008, the government has planned to build an oil refining and petrochemical complex in the Karadagh region of Baku (about 45 km south of the capital). However, a sharp drop in oil prices in 2015 forced the government to cut spending. As a result, it was decided to build new chemical enterprises in the suburb of Sumgayit (40 km north of Baku), dismantle the old refinery located on the shore of the Baku bay and modernize the refinery, which was built in 1953. More than five years have passed since then, and the dismantling of the old refinery has not yet been completed, since processing is partially carried out there.

In all likelihood, this work will last until 2025. And oil refining in the center of the capital will continue until the middle of this century. The capital of Azerbaijan still does not have a new master plan. That is, construction is not proceeding according to plan, but mainly according to circumstances. For example, multi-storey buildings for residents are being built 20-40 km from the center, while the central part of the city is full of old industrial enterprises with a total area of ​​about 1000 hectares.

It should be noted that in all the Caspian countries (except Iran) – Turkmenistan, Kazakhstan and Russia, new refineries have already been modernized and built, which produce Euro-5 fuel. And since April 2014, Azerbaijan is still an importer of high-octane gasoline (for the last two years, low-octane gasoline has also been imported during the stoppage for scheduled maintenance of the Baku refinery).