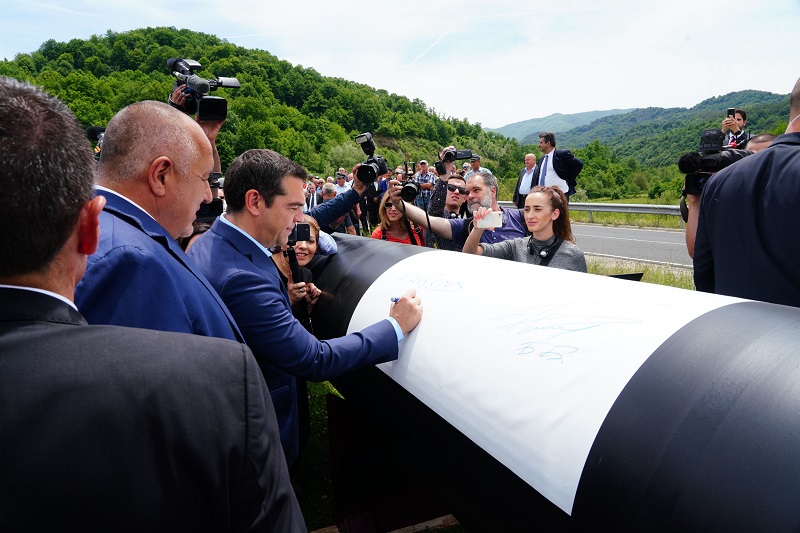 The Prime Ministers of Bulgaria and Greece took part in the groundbreaking ceremony; high-level officials from Azerbaijan came to show support for the IGB project

The Executive Officers of the project company ICGB gave start of the construction activities for the gas interconnector Greece – Bulgaria. During the groundbreaking ceremony near the border with Greece Teodora Georgieva and Konstantinos Karayannakos made the first groundbreaking in the presence of officials from Bulgaria, Greece and Azerbaijan. The key event was attended by the Prime Minister of Bulgaria Boyko Borissov and the Prime Minister of Greece Alexis Tsipras, the energy ministers of both countries, the first Deputy Prime Minister of Azerbaijan and high-level officials from the European Commission (EC) and the European Investment Bank (EIB).

During the ceremony it was announced that earlier today the Council of Ministers of the Republic of Bulgaria has approved the text of Intergovernmental Agreement on the Gas Interconnector Greece-Bulgaria as the basis for the conclusion of the negotiations and has authorized the Minister of Energy of the Republic of Bulgaria to conclude the final agreement. The Intergovernmental Agreement regulates the project’s support at government level and stabilizes its tax treatment for a period of 25 years.

“The continuous corporate efforts of ICGB and its shareholders, the political will of the governments of Bulgaria and Greece and the unquestionable support from the EC helped us to successfully overcome the challenges before IGB”, announced the Executive Officer from  Bulgarian side Teodora Georgieva. According to her, the gas project already has secured funding, the contractors for all key activities have been selected, the contracts for owner’s engineer and construction supervision have been signed and the reserved capacity will ensure the successful operation of the interconnector.

“The synergy of IGB with other key energy projects – part of the Southern Gas Corridor like TAP and TANAP, makes the need of the interconnector undeniable and inseparable part of the comprehensive energy strategy and the priorities of Europe”, underlined the Executive Officer of ICGB from Greek side Konstantinos Karayannakos. He noted that the project ensures real diversification of gas supplies, which will improve Greece and Bulgaria’s positions on the energy market and will contribute to the integration of the entire region.

The Vice President of the EC Maroš Šefčovič sent his regards and congratulated the project via video message. In his address he noted that IGB’s realization will improve the security of the gas supplies for the region and will contribute to Europe’s energy connectivity. The first Deputy Prime Minister of Azerbaijan Mr. Yagub Eyyubov attended the groundbreaking ceremony personally to express support for the completion of the project. He called for successful and continuous cooperation between Azerbaijan, Bulgaria and Greece not only in the energy sector. IGB also received support by the Azeri company SOCAR, which supplies the main capacity for Bulgargaz, the shipper representing the backbone of the project.

The groundbreaking ceremony, which was held near Kirkovo, Kardzhali district, was attended by over 150 guests and high-level officials from different countries. After giving the start of the construction activities, the Executive Officers together with the Prime Ministers of both countries signed one of the 12-meter line pipes that will be used for the construction of the interconnector.

IGB is developed by the project company ICGB AD, where shareholders with equal rights are the Bulgarian Energy Holding and IGI Poseidon SA. The Public Gas Corporation of Greece (DEPA S.A.) and EDISON S.p.A are co-shareholders in IGI Poseidon SA. The key gas interconnector will have the length of 182 km and a technical capacity of up to 3 bcm per year with an option for increasing the transmission capacity to up to 5 bcm per year by construction of a compressor station. The route of the project will connect the Greek town of Komotini with the Bulgarian town of Stara Zagora. The IGB gas pipeline will connect the transmission systems of DESFA and TAP in the town of Komotini with the transmission system of the Bulgarian Bulgartransgaz. After a successfully completed Market test, the project already has capacity of 1.57 bcm booked. IGB’s completion will bring four new shippers to the Bulgarian market which will improve the country’s capabilities in the energy field.

The financing of the project is secured through a shareholder investment, a European Investment Bank loan secured with a sovereign guarantee of EUR 110 million and a EUR 39 million grant from the European Structural and Investment Funds for Bulgaria through the Bulgarian Operational Program OPIC. The regulatory status of IGB is regulated by an exemption decision from third party regulated access. All key public procurement procedures have been completed successfully, with selected contractors as follows:

The construction of the gas interconnector Greece-Bulgaria aims to ensure diversification not only of the routes but also of the natural gas sources for Bulgaria and the region. As part of the development of the Southern Gas Corridor, through IGB Bulgaria and its neighboring countries will have access to alternative supplies from the Caspian region as well as from existing or prospective LNG terminals. IGB‘s implementation also provides opportunities for transit transmission through the gas pipeline Greece-Bulgaria and the gas transportation system of Bulgartransgaz EAD to the other gas interconnectors with Romania and Serbia. The significance of IGB lies beyond the national boarders of Bulgaria and Greece as it also provides opportunities for connectivity with other future important projects in the region like the LNG terminal at Alexandroupolis, Greece; East Med for direct connection of resources from the Eastern Mediterranean and with Greece through Cyprus and Crete as well as liquefied gas from Israel, Egypt.

The deadline for completions of the construction of the interconnector is 18 months after initiation construction activities. IGB is expected to enter into operation in 2020.

The planned length of the pipeline is 182 km, the pipeline diameter will be 32” and the projected capacity will be up to 3 bcm/y in the direction from Greece to Bulgaria.