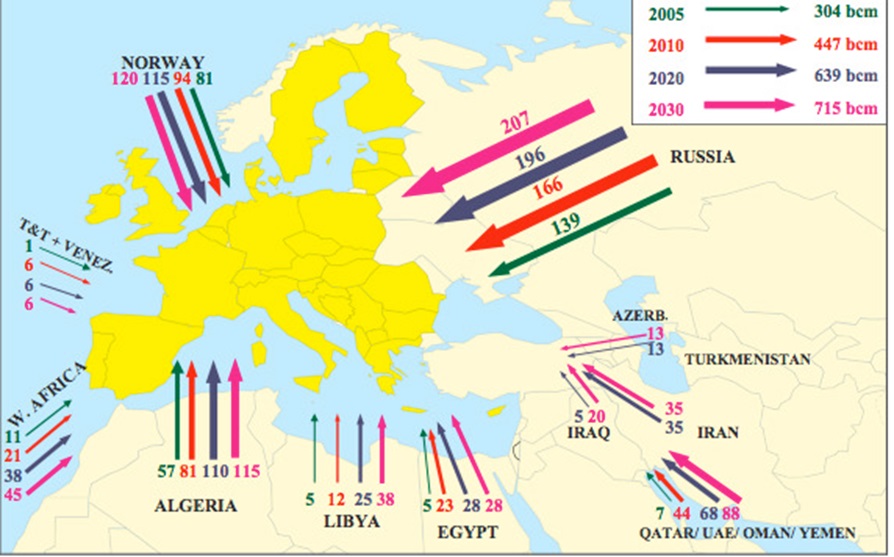 The global natural gas market is moving towards repeating the fate of the oil market in 2014-15.

Against the background of an oversupply of LNG, the massive introduction of new liquefaction facilities in Australia, Qatar and the USA, as well as the warm weather in key importing countries, the cost of gas in Europe and Asia has collapsed to a record value since the beginning of 2015.

At the largest European hub – TTF in the Netherlands – gas fell by 50% compared with September levels, analysts at Morgan Stanley say: from $ 10 to $ 5 per million BTU (March 21).

This is almost 30% lower than what Russian officials and Gazprom expected: the company’s budget was set based on a price of $ 240 per 1,000 cubic meters, and the Ministry of Economic Development and Trade laid the baseline forecast scenario of $ 233.

For the first time since 2015, the world market has developed a situation when gas in Europe is more expensive than LNG in Asia: this means that Middle Eastern and American producers are more profitable to send tankers to the European market, analysts for S & P Global Platts say.

Last year, global LNG production increased by 22 million tons, and in 2019 volumes it will double – 46 million tons of new products will rush to the market, while the key consumer, providing 70% of additional demand – China – will increase purchases by only 12 million tons, assesses Bank of America Merrill Lynch.

As a result, there will be an excess in the market, which will be impossible to sell anywhere other than Europe. First of all, it will be American gas: according to Wood MacKenzie, 45% of all new LNG liquefaction capacities will be launched in the USA in 2019.

As a result, the maximum terminal capacity will double from 3.4 to 7.8 billion cubic feet per day (80.6 billion cubic meters per year).

This promises a further fall in gas prices in Europe: in order to stop the influx of LNG, the cost of spot contracts at TTF should drop another 25%, or $ 1.2 per million BTU, according to BofA.

Gazprom will have to lower the price of gas to $ 140 per 1,000 cubic meters in order to cut American competitors from the European market, according to the analyst for Energy Aspects.

The gas holding, whose budget is already deficient due to the mega projects Nord Stream 2, the Power of Siberia and the Turkish Stream, will have new financial problems and, perhaps, this will make it necessary to increase the debt-raising program. Reducing the price of gas by an average of $ 1 per 1,000 cubic meters per year reduces Gazprom’s revenue by about 13 billion rubles ($ 200 million) at a constant exchange rate of the ruble, according to analysts at BKS Express.