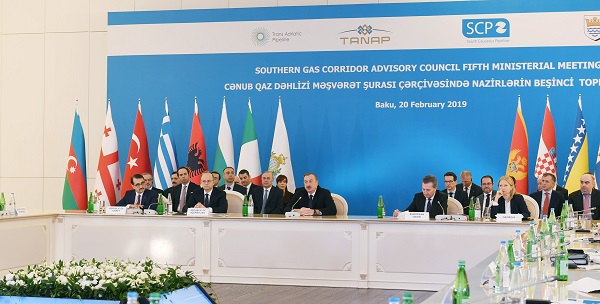 The 5th meeting of the Consultative Council (CC) on the project to create the Southern Gas Corridor (SGC) is opening in Baku today.

According to the Ministry of Energy of Azerbaijan, representatives of Serbia, Hungary and San Marino will take part in this event for the first time.

“Thus, the meeting will be attended by the Deputy Minister of Mining and Energy of Serbia Mirzhana Filipovic, Ambassador at Large for Energy Security of the Ministry of Foreign Affairs and Trade of Hungary Pal Sagvari, and Minister Plenipotentiary – Director for Economic Affairs of the Department of Foreign Affairs of San Marino Dario Galassi,” said the Ministry of Energy.

The meeting will also be attended by Marko Redulovic, Director General of the Energy Directorate of the Ministry of Economic Affairs of Montenegro, Deputy Minister for International Trade and Economic Relations of Bosnia and Herzegovina Mato Franzichevich, State Secretary of the Ministry of Energy of Romania Lulian Tudorak, and Advisor to the President of Turkmenistan Yahshigeldi Kakaev. Representatives of the World Bank, the European Investment Bank, the European Bank for Reconstruction and Development, the International Finance Corporation, the Asian Development Bank, the Multilateral Investment Guarantee Agency, the TANAP and TAP gas pipeline consortia, Snam, Fluxys, LNG Croatia, Plinacro, ICGB AD and others are also expected to attend the meeting.