Group of representatives of the International Monetary Fund headed by Natalia Tamirisa visited Ashgabat on October 1 – 5, 2018 for the assessment of development of macroeconomic and financial situation as well as for discussion of the challenges and priorities in economic policy of Turkmenistan. 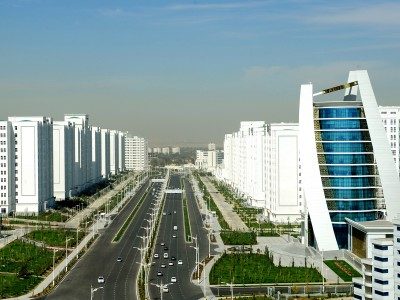 During regular visit, the representatives of the largest financial structure held number of meetings with top personnel of the Government administration, representatives of business circles, financial sector and diplomatic community, during which they were familiarized with the main outcomes of financial and economic reforms in Turkmenistan. Based on the analysis of financial and economic situation, monetary and credit policy of the state, implementation of national programmes, objective conclusions and recommendations have been prepared and high assessment has been given to macroeconomic indicators and achieved success.

At the end of the visit, Mrs Tamirisa made a statement saying that indicators of economic growth in Turkmenistan remain stable in general. At the same time, it was noted that changes of correlation between internal demand and export have happened in the structure of economic growth with the increment of export share, which was mainly caused by the measures for import reduction.

Press release of the IMF also says that increment of prices on oil products in the world market make positive influence on the economy of our country, its foreign trade turnover and fulfilment of the State budget. According to the experts, growth of export volumes of natural gas, petrochemical and other products would support economic growth of Turkmenistan in future.

President Gurbanguly Berdimuhamedov noted in his speech at the session of the People’s Council on September 25 this year that development of oil and gas industry has been and remains to be one of the directions of economic progress of the country for the years of independence as the facilities for production of hydrocarbon resources, their processing and export are the most profitable and perspective for Turkmenistan. The Head of the State highlighted establishment of new branches, which are to provide the diversification of export capabilities as well as the formation of developed multi-optional pipeline network of energy resources supply, among perspective vectors of energy strategy.

The statement of the head of the IMF mission justifies the recommendation for further economic growth of the country, which are consonant with programme objectives outlined at the session of the People’s Council.

Therefore, it is necessary to continue reconfiguring the measures for further reduction of external misbalances, improvement of competiveness and achievement of the goal for provision of stable, diversified and comprehensive growth. It is also important to pay special attention to projects in development of the infrastructure, education and health protection, which support economic growth.

Announced decision on cancellation of free provision of water, gas, electricity and salt to the population form 2019 will also help to save the state resources and to stimulate efficient consumption of energy and water resources, the experts of the IMF think.

Continuation of the process of restructuration or privatization of the state facilities as a stimulus for change over to market relations will allow improving the efficiency and production and, at the same time, reducing the pressure of the state finances and surplus of foreign trade balance.

Liberalization of business regulation, establishment of equal conditions for all and better use of market-based measures will provide the development of private sector and creation of work occupancies.

In her statement, Natalia Tamirisa also noted that formation of human capital and training of youth in the skills required in private sector would allow supporting mid-term perspective of economic development. Modernization of the bases of tax and budget, monetary and credit policies together with improvement of quality and availability of economic and financial statistics would support the development and taking of the decisions, improvement of trust and attraction of foreign investments.

It is worth mentioning that President Gurbanguly Berdimuhamedov outlined specific measures and mechanisms on all directions mentioned in the IMF Press release for achievement of the goals laid in the basis of the Programme of social and economic development of the country in 2018 – 2024. In particular, the Programme formulated the objectives of full involvement of the resources and capabilities for stable growth of national economy, rapid transit to market relations, development of non-governmental sector, establishment of joint and stock ventures, improvement of activity of stock exchanges and security markets.

The Head of the State focuses on the improvement of personnel potential, transfer to digital economy and formation of informational community, development of market-based economy and entrepreneurship. Investments to human capital are of the most priority as reliable and rapidly profitable source of investments. Therefore, the investments to education and health protection remain one of the most perspective directions of the state policy.

The President has also initiated new phase of the reforms in national agricultural complex, which allowed increasing economic and export potential of the country, improving the wealth level of the population. System of beneficial crediting allowing wide attraction of provide entrepreneurs to development of processing industry structure in agriculture, production of high quality food products is also improved.

In general, the draft State budget of Turkmenistan in 2019 is based on the support of stable high rates of economic growth by intensive development of the branches and diversification of the economy, realization of large-sale and important investment projects that have international and regional significance.

Social policy of our state is aimed at the improvement of level and quality of life of the population and creation of the conditions for development of human capital, continuation of the reforms in educational sphere, development of health protection system of the population and provision of its social protection. For example, the volume of financing of social sphere will be not less than 75 – 80 percent from the total volume of expences of the State budget in 2019.

Significant part of the investments will be sent to development of hydrocarbon processing facilities, increment of energy sphere power capacities, chemical production and expansion of transport and communication complex.

Regular assessments and forecasts of the IMF invariable confirm that Turkmenistan confidently continues its social and economic development. National model of market economy with consideration of internal interests and trends of integrational processes of the world community is formed in the country in the process of multisided and multilevel reforms.

The International Monetary Fund is the partner of Turkmenistan in economic reforms and render technical assistance to the changes made by the Government. Next consultation of the IMF and Turkmenistan are planned in March 2019.