Gazprom has built 95% of the offshore section of the Turkish Stream gas pipeline, the company said in a press release. 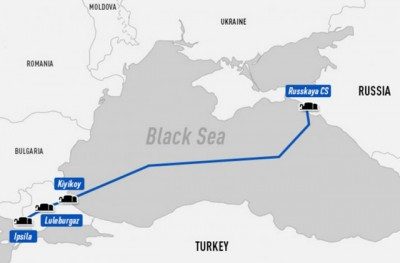 “To date, 1,775 km of pipes have been laid in total along both lines, which is 95% of the total length of the offshore section of the gas pipeline.

The construction of coastal facilities in Russia near the city of Anapa has been completed; commissioning works are underway and will be completed in 2018. In Turkey, construction of a receiving terminal continues near the village of Kiyikoy,” the message says.

Gazprom began construction of the offshore section of the Turkish Stream gas pipeline in May 2017. The offshore section will run through the bottom of the Black Sea to the coast of Turkey. Its length is 930 km. Further, the land transit (second) line to the border of Turkey with neighboring countries with a length of 180 km will be laid.

The first string will be designed for the Turkish market, and the second – for gas supply to the countries of Southern and Southeastern Europe. The capacity of each line is 15.75 bcm of gas per year. Proceed to the supply of gas is planned at the end of 2019.

At the end of May, Gazprom and the government of the Republic of Turkey signed a protocol on the land section of the transit stream of the Turkish Stream gas pipeline to supply Russian gas to European consumers.