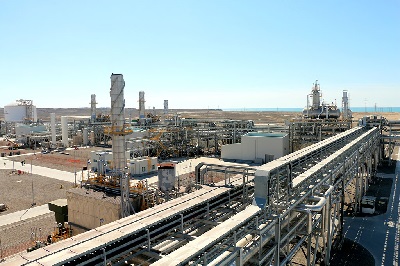 The President underlined that the amount of harmful emissions into the atmosphere stayed within the limits of the international standards adopted in Turkmenistan.

The construction of the Garabogazkarbamid plant was implemented based on the contract between the Turkmenhimiya State Concern and the consortium of companies – Mitsubisi Corportion (Japan) and Gap Inşaat Yatirim ve Dis Ticaret A.S. (Turkey) with a total amountof more than US$ 1,570 billion.

In addition to the main workshops for the production of synthetic ammonia and urea, the new complex is equipped with a gas turbine generator for electricity production and a seawater desalination and treatment plant.

A three-metre conveyor system is mounted to transport products from the factory to the dock. The old pier in the city of Garabogaz was modernized to export of products by sea and river routes.

The pier, equipped with the latest technologies, is capable to serve two vessels simultaneously. The special equipment produced by the German company FAM, two 80-ton loaders of the Liebherr company were installed at the pier to load the goods to vessels.

Garabogazkarbamid plant is designed to process about one billion cubic meters of natural gas daily, to produce 2,000 tons of synthetic ammonia daily and based on it – 3,500 tons of urea fertilizer.

The carbamide produced at the plant contains 46.2% of nitrogen. This indicator is considered to be the highest among nitrogen-containing and nitrogen fertilizers.

The Yokohama Japanese company ensured the full automation of the technology management system.

Within the framework of the project, 10 two-storey apartment houses with improved conditions were built for 40 families. Over 1,000 jobs were created at the enterprise.