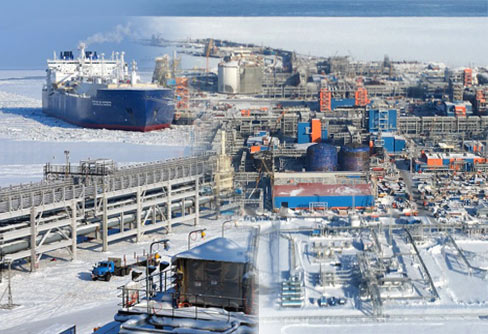 10/08/2018
Author: Ilham Shaban
Views: 620
Total announces that the first shipment of Liquefied Natural Gas (LNG) from the second train of the Yamal LNG project in Northern Russia is ready to leave Sabetta.

This train adds an additional 5.5 million tons per year of LNG capacity to the facility, bringing the total capacity in operation to 11 million tons per year. At full capacity, the three-train facility will supply 16.5 million tons of LNG per year to Asian and European markets. The third train is expected to start up in early 2019.
“Following the successful start-up of Yamal LNG in December last year, the first shipment from the second train ahead of schedule is another major milestone for this world-class LNG project,” commented Patrick Pouyanné, Chairman and CEO of Total. “The Yamal LNG production adds competitive LNG resources to our growing portfolio. We will keep developing new LNG projects in the Russian Arctic with our strategic partner Novatek, as illustrated by the recent announcement of our entry in Arctic LNG 2 with 10% direct working interest.”
Last May, Novatek and Total also agreed that Total will have the opportunity to acquire a 10 to 15% direct interest in Novatek’s future LNG projects in Yamal and Gydan.
The project is operated by the Yamal LNG Company, owned by Russian independent gas producer Novatek (50.1%), Total (20%), CNPC (20%) and Silk Road Fund (9.9%).
One of the biggest LNG projects in the world, Yamal LNG is developing the 4.6 billion barrels of oil equivalent of reserves (boe) from the giant onshore South Tambey gas and condensate field, located on the Yamal Peninsula.
The project includes an integrated gas treatment and liquefaction facility with three trains of 5.5 million tons per year capacity each, storage tanks, and port and airport infrastructure.
Yamal LNG’s production is sold under long-term contracts in Asian and European markets, predominantly under oil-indexed price formulas. LNG will be supplied to the markets all year round through an innovative shipping approach involving a fleet of purpose-designed ice-class LNG carriers that will travel the Northern Sea Route to Asia through the Bering Strait in the summer.