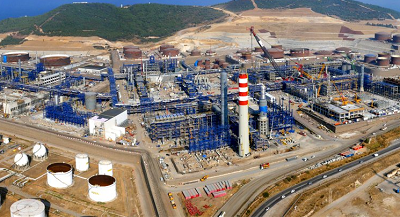 The annual profit from the activities of the Star refinery in Turkey, built by SOCAR Turkey Energy, will be $ 500 million per year, said the head of the company Zaur Gahramanov.

“We believe that at least $ 500 million per year will be our net profit from the activities of the Star refinery, and if there are no complications during the testing of the plant, we plan to reach full capacity from January 2019 – processing about 10 million tons of oil per year,” said Gahramanov in an interview to the Azerbaijani television channel CBC.

According to him, according to the latest estimates of SOCAR Turkey Energy, the payback period of the funds invested in the construction of the Star refinery will be 9-10 years.

“With a total project cost of $ 6.3 billion to date, about $ 5.6 billion has been invested,” Gahramanov said.

It should be noted that on August 3, 2018, the Star refinery accepted the first shipment of Azeri Light oil of 80,000 tons and proceeded with the test processing, which will continue until the plant is opened in October 2018. By August 10, the refinery will receive a second shipment of oil for processing – the Russian Urals brand with a volume of 100,000 tons.

* The foundation of the Star refinery was laid in Izmir on October 25, 2011. In June 2014, SOCAR Turkey Energy signed loan agreements with 23 commercial banks to finance the project and raised a $ 3.29 billion loan. The Oil Fund of Azerbaijan allocated $ 1 billion 392.8 million to the project.