Uniper SE and SOCAR will collaborate on projects aimed at improving the energy efficiency of oil and gas production in Azerbaijan. 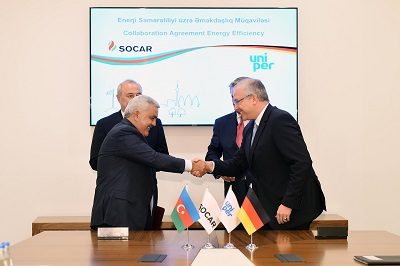 The two companies signed an agreement to that effect today in Baku during of German Chancellor Angela Merkel’s trip to Azerbaijan. The German energy provider and the Azerbaijan state oil and gas company have been working in close cooperation for the past five years.

The principle aim of the new agreement is to enhance efficiency in energy use in production processes and thereby lower greenhouse gas emissions in Azerbaijan. Initial projects have already been identified and are now set to be reviewed in greater detail. The feasibility study shows, thanks to the application of modern technologies, a significant achievement of natural gas savings in the gas grid is possible.

Back in 2013, Uniper and SOCAR concluded a long-term gas supply contract. Until 2045, up to 1.5 billion m³ of natural gas is slated to flow to Europe each year via the so-called Southern Gas Corridor. These gas deliveries serve to diversify the European and with it the German gas supplies and enhance security of supply and competition.

In 2016 SOCAR and Uniper formed a joint venture for the development of energy efficiency. The JV will gain additional value by modernizing and expanding the electricity and steam generation facilities at the SOCAR chemical complex in Sumgayit Azerikimya. The launch of new facilities is scheduled for early 2020. The German government is assisting the project through a HERMES export credit guarantee. With an investment volume of around 30 million euros, the project draws mainly on German technology.

Uniper and SOCAR are also bound together by their longstanding partnership. This partnership covers projects in the fields of technology, energy management, management training and corporate social responsibility.

Christopher Delbrück, Member of Management Board at Uniper, commented on the contract signing in Baku: “The new project marks another milestone in the partnership between the two companies, set to run over the long term. It will help reduce greenhouse gas emissions in the region and conserve the country’s natural resources. The collaboration between Uniper and SOCAR is of mutual benefit to both sides and offers sound prospects for the future.”

Rovnag Abdullayev, President of SOCAR: “Strategic cooperation we have with one of the leading German companies UNIPER provided great opportunities for Azerbaijan to realize its natural resources as well as benefit from the modern technologies. Enhancing energy efficiency is of great value both for environment protection and gaining additional value from the natural gas saved in this project. Inking this agreement once again reiterates the high level of economic ties between our two countries, demonstrates the cooperation parties enjoy under the Southern Gas Corridor project as well as highlights the important role Azerbaijan and SOCAR play in European energy security.”