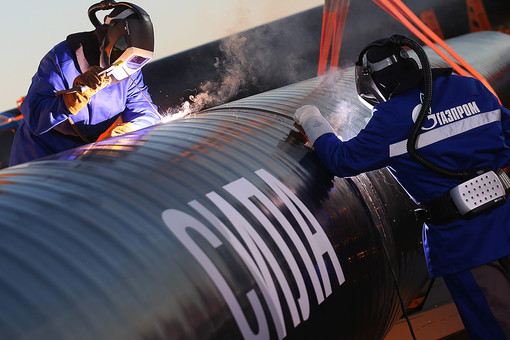 The Gazprom Board of Directors reviewed and approved the efforts as part of the implementation of the Power of Siberia project and the shaping of gas processing infrastructure in Russia’s Far East.

It was noted that Gazprom’s ambitious investment projects in the eastern part of Russia were pivotal to the country’s sustainable social and economic development. By exploring gas reserves and creating gas transmission and processing capacities, the Company works toward providing domestic consumers with reliable gas supplies in the long term, as well as strengthening Gazprom’s foothold in the Asia-Pacific region.

In order to establish the eastern route for Russian gas exports to China, the Company sets up major gas production centers. Extensive efforts are underway to pre-develop the Chayandinskoye field, which serves as the basis for the Yakutia gas production center, with 113 development wells drilled and the core process equipment being assembled. The construction readiness of the facilities required for gas production is currently at 50 per cent.

Gas from Chayandinskoye will go first into the Power of Siberia gas pipeline, a crucial link between the resource base and consumers. By now, a total of 1,954 kilometers, or 90.5 per cent of the linear section running from Chayandinskoye to the Chinese border in the Amur Region, is finished. The bulk of construction and installation work for this section will be completed this year. The operations scheduled for 2019 will therefore include pipeline tests, installation of power supply, communications and telemetry systems, and start-up and commissioning.

Construction of a two-string crossing under the Amur River within the Power of Siberia gas pipeline is also in progress. Pipe pulling in the first tunnel was completed in July 2018. Another construction project, this time for the Atamanskaya compressor station, was launched near the border in late 2017. The station will maintain the required pressure during gas deliveries to China.

Prior to being fed into Power of Siberia, natural gas will undergo treatment, producing valuable petrochemical and other components. For that purpose, Gazprom is building the Amur Gas Processing Plant, the largest such plant in Russia and second-biggest in the world. The priority railway and river infrastructure facilities, including ones for transporting large cargo, are already in place. Construction of the plant is in full swing, as the gas processing facilities are being set up at the moment.

In pre-developing Chayandinskoye and building Power of Siberia, Gazprom is acting in strict compliance with the schedule for Russian gas supplies to China, slated to start on December 20, 2019.

The Management Committee was instructed to continue implementing the Power of Siberia project and shaping gas processing infrastructure in Russia’s Far East.