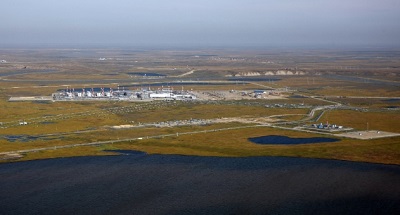 Alexey Miller, Chairman of the Gazprom Management Committee, today held in Bovanenkovo (Yamal-Nenets Autonomous Area) a meeting on the pre-development project for the Kharasaveyskoye gas and condensate field and the gas transmission system.

Prior to the meeting, Alexey Miller inspected the construction site of Gas Production Facility No. 3 at the Bovanenkovskoye field and the utility system at Kharasaveyskoye.

It was noted that the Yamal Peninsula was of strategic importance to the Russian gas industry and the long-term reliability of gas supplies to consumers. In this region, the Company established and systematically develops a major new gas production center. The Yamal gas production center is on a path toward becoming the largest such center in Russia and replacing the dwindling reserves of the Nadym-Pur-Taz region.

Currently, two gas production facilities are successfully operating at the Bovanenkovskoye field, which forms the basis of the Yamal center. This year will see the launch of the third and final gas production facility, which will bring the field to its design production capacity of 115 billion cubic meters of gas per year.

It was resolved at the meeting to begin the full-scale development of the Kharasaveyskoye field in 2019. Kharasaveyskoye is located north of Bovanenkovskoye, mostly onshore in the Yamal Peninsula and partly offshore in the basin of the Kara Sea. The field is unique thanks to its enormous gas reserves, which amount to 2 trillion cubic meters (C1+C2 categories). Its Cenomanian-Aptian deposits will be a priority, with the start of gas production slated for 2023 at a design capacity of 32 billion cubic meters per year. It is planned to develop the deeper-lying Neocomian-Jurassic deposits later.

By now, Kharasaveyskoye has a utility system with a camp for shift workers and an auxiliary power station. The pre-development project envisages the construction of a comprehensive gas treatment unit, a booster compressor station, clusters of producing gas wells, and transport and power infrastructure. Offshore wells will be drilled from onshore.

Gazprom places increased emphasis on maintaining a high level of industrial safety and preserving the unique Arctic environment. Kharasaveyskoye is characterized by complex geocryological conditions, including thick permafrost and high soil salinity, which makes it especially difficult to set up facilities in the area. In order to avoid the risks of permafrost melting, it is planned to widely use vapor-liquid cooling systems. To prevent permafrost from melting during gas production, wells will be constructed with thermally-insulated tubings and casings. Closed-loop water supply systems will help avoid soil and water pollution. The field’s linear facilities will be provided with special crossings for deer and wildlife migration.

To transmit gas extracted from Kharasaveyskoye, a connecting gas pipeline stretching some 100 kilometers to Bovanenkovskoye will be built. The gas will then be fed into Russia’s Unified Gas Supply System. The Company is already conducting design works to expand the capacities of the northern gas transmission corridor.

Particular attention at the meeting was paid to shipping logistics for the pre-development of Kharasaveyskoye. Over 1.5 million tons of equipment and materials will be delivered to the field during the construction period. In winter, it is planned to use for that purpose the Obskaya – Bovanenkovo railroad and a winter road between the Karskaya station and Kharasaveyskoye. In summer, shipments to the Kharasavey port station will be delivered by sea and river transport.

“The development of the Yamal gas production center is an ambitious strategic goal of national importance. The center is key and essential to the domestic gas industry in the 21st century. It offers a new frame of reference for gas flows in Russia and export markets. Bringing Bovanenkovskoye to its full capacity, exploring Kharasaveyskoye and later the other Yamal-based fields, and expanding the northern gas transmission corridor are all crucial activities for the Company,” said Alexey Miller.

At the end of the meeting, the Company’s specialized structural units were instructed to provide for the commissioning of the Kharasaveyskoye field in 2023.