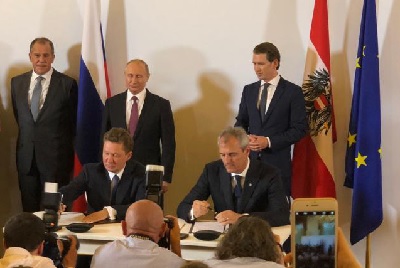 Vladimir Putin, President of the Russian Federation, and Sebastian Kurz, Austrian Federal Chancellor witnessed today the signing of an agreement for the extension of natural gas supplies to Austria until 2040, signed by Alexey Miller, Chairman of the Gazprom Management Committee, and Rainer Seele, Chairman of the OMV Executive Board.

The existing gas supply contract would have run until 2028. OMV believes that Europe’s gas demand will rise; particularly due to highly efficient gas-fired power plants which will gradually replace those powered by coal. At the same time, equity production in Europe is set to decline, as recently seen in the Netherlands. According to the International Energy Agency (IEA), demand for natural gas in Europe will increase by more than 20% by 2030.

“The Agreement signed today is yet another testament to the growing need for gas imports both in Austria and Europe in general – the need that Gazprom is ready to satisfy. By implementing the construction project for the Nord Stream 2 gas pipeline, we will make gas deliveries even more reliable for the benefit of consumers,” said Alexey Miller, Chairman of the Gazprom Management Committee.

Chairman of the OMV Executive Board, Rainer Seele: “By 2030 the European Union will have to import more than 80% of its demand for natural gas. With the extension of the gas supply contract, we are making an important contribution to the supply for Austria as well as for other European countries in the light of increasing demand. This will also enable us to reduce CO2 emissions.”

The signing of the agreement took place against the backdrop of celebrations in Vienna marking the 50-year partnership of Gazprom and OMV. This represents another significant milestone in securing the future energy supply of Austria and Europe.