President of LUKOIL Vagit Alekperov and Chairman of the Management Board of the National Company KazMunayGas Sauat Mynbayev signed a Principles Agreement on Zhenis license area, in Astana yesterday. 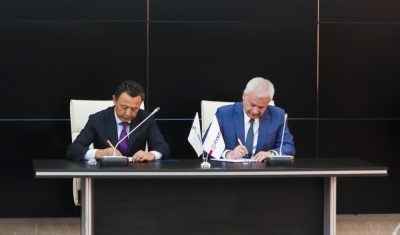 According to the agreement, the parties will establish a consortium upon completion of relevant procedures, required for the agreement to enter into force, and negotiate with a competent authority of the Republic of Kazakhstan to qualify for exploration and production at the block.

Zhenis area is located in the Kazakhstani sector of the Caspian Sea, at depths varying from 75 to 100 meters, close to fields with proven hydrocarbon reserves, 80 kilometers offshore and 180 kilometers away from the port of Aktau (Kazakhstan).

​The new Caspian project is an important milestone in terms of sprawling of the company’s resource base in the strategically critical region, where the company has already gained significant competencies. ​

A major foreign investor in the country’s economy, LUKOIL has been successfully operating in Kazakhstan since 1995. The company, involved in the development of Tengiz, Karachaganak and Kumkol fields, is also a party to the joint venture to develop Tsentralnoye field in the Caspian Sea and is a member of the Caspian Pipeline Consortium.

The Caspian Sea is one of LUKOIL’s major regions contributing to its production growth. The company discovered ten fields with total recoverable reserves exceeding 1 billion tonnes of reference fuel in the Russian waters of the sea, including Russia’s largest discovery of the past 25 years – Vladimir Filanovsky field.
Lukoil.com