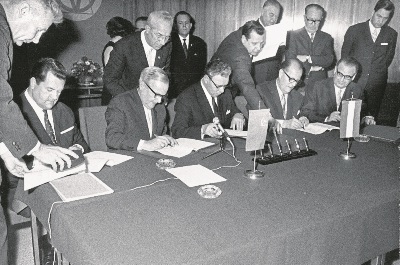 Fifty years ago, on June 1, 1968, the Soviet company Soyuznefteexport and Osterreichische Mineralolverwaltung (OMV) signed an agreement for supplying natural gas from the USSR to Austria. In a mere three months, gas from Western Siberia reached the Baumgarten station.

Signing of contract for natural gas supplies from USSR to Austria. 1968

The Republic of Austria became the first country in Western Europe to sign a gas contract with the Soviet Union. The initial amount of annual gas supplies – 142 million cubic meters – grew more than 64-fold in 50 years. Today, Austria is a major buyer of Russian gas. In 2017, gas exports reached a record 9.1 billion cubic meters, with over 218 billion cubic meters delivered to the country since 1968.

“The strategic partnership of Gazprom and OMV is built on a robust foundation of the 50-year cooperation between our countries in the gas sector. We continue to work towards strengthening and advancing this relationship while meeting Europe’s growing demand for natural gas. We plan to reach a new level of strategic cooperation in the near future,” said Alexey Miller, Chairman of the Gazprom Management Committee.

“In the past 50 years, we have received reliable gas supplies from Russia and have been able to provide our industrial and household customers with high-quality natural gas without interruption. This is a good base for expanding the partnership with Gazprom in the long term,” said Rainer Seele, Chairman of the Executive Board of OMV.

To mark the 50-year anniversary, the “Old Masters from the Hermitage” exhibition featuring world-famous masterpieces of painting will be held in Vienna’s Kunsthistorisches Museum with support from Gazprom and OMV. In the autumn, the exhibition will move to the State Hermitage Museum in Russia.

OMV AG is Gazprom’s main partner in Austria. The companies cooperate in gas production, transportation and supplies. In 2016, Gazprom and OMV launched “Imperial Capitals: St. Petersburg – Vienna,” a joint cultural project uniting the art and history of Russia and Austria.