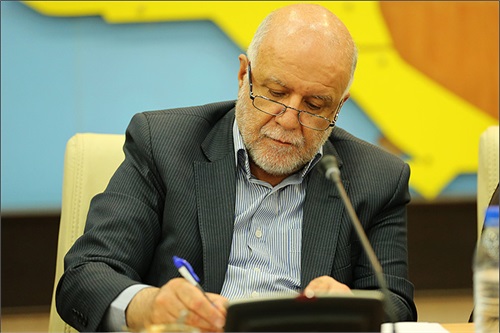 Iranian Minister of Petroleum Bijan Zangeneh has called on Suhail Mohammed Al Marzouei, UAE Minister of Energy and Industry and the President of the OPEC Conference in Vienna on July 22, to instruct inclusion of an agenda item in support for members targeted by sanctions.

Mr. Zangeneh sent a letter to Al Marzouei, in which he underlined imposition of unlawful, unilateral and extraterritorial sanctions by the US government on the Islamic Republic of Iran which clearly violate the international agreement that had been endorsed by the UN Security Council.

By referring to Article 2 of the Statute of the Organization of Petroleum Exporting Countries (OPEC), which emphasizes safeguarding the interests of Member Countries individually and collectively, Mr. Zangeneh asked Al Marzouei to instruct the Secretariat to include a separate agenda item under the title “OPEC Ministerial Conference support to the Member Countries that are under illegal, unilateral and extraterritorial sanctions”.

The Iranian Minister of Petroleum further stressed that should the sanctions lead to any reduction in the oil market share of the I.R. Iran, Tehran, once the illegal limitations were resolved, reserves the right to return to its oil market share in the shortest possible time and resume its normal production-level and that it would not accept any limitations in that regard.