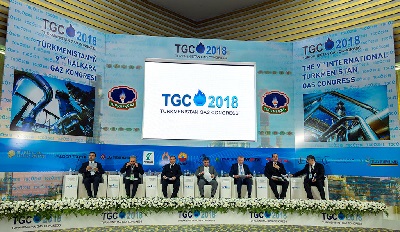 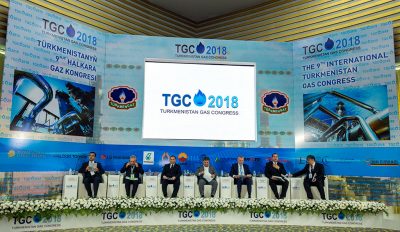 As it was informed this year, the State Concern Turkmengaz and Dutch KHB Holland Company were the organizer of this large specialized forum.

High interest to the Congress was raised mainly by the fact that today, the importance of gas, comparing with other energy carriers, is steadily growing in the structure of the world hydrocarbon consumption. Therefore, the intent of leading companies to establish close cooperation with our country in gas sphere is quite obvious since modern Turkmenistan confidently declares itself as one of perspective partners among biggest suppliers of energy carriers to international markets.

The forum held for the 9th time gathered large number of national private companies this year. It includes the sponsors of current forum – Bir Dunya and Gazyk companies, which expand the geography of its activity in the region, what became the evidence of the efficiency of the policy of President Gurbanguly Berdimuhamedov aimed at the support of private sector and provision of all opportunities for development of business.

The participants highlighted that favourable investment climate was made in Turkmenistan, simplified system of taxation and other guarantees presented by the Government are formed up. It opens wide opportunities for beneficial partnership with all interested sides in development of gas deposits, modernisation of existing and creation of new productions, implementation of advanced technologies and training of qualified personnel of the industry.

In the second day of the forum, the participants reviewed such subjects as the improvement of the efficiency of business processes in distribution and use of natural gas, expansion of the geography of supplies of Turkmen gas as well as studies new petrochemical projects of profile concerns of Turkmenistan.

Information about new investment project, which implementation would support the growth of supplies of gas from Turkmenistan to number of neighbouring countries that would become the foundation for consolidation of regional and global energy security, has been presented. The projects offers several routes of supplies and according to authorised representatives initial working plans taking into account the main parameters of pipelines’ construction have been elaborated.

Implementation of the plans for deep processing of gas using advanced technologies for production of the polymers and liquid fuel initiated by Turkmen leader was one of the points of agenda. Highlighting special importance of the expansion of the variety of goods produced by fuel and energy complex of the country, the speakers told about the realization of such large-scale projects as the construction of the plant in Ovadandepe, Ahal velayat for production of high quality gasoline from natural gas on GTG technology, big petrochemical complex in Kiyanly for production of polyethylene and polypropylene.

Initial discussions with interested oil and gas companies about attraction direct foreign investments for implementation of new long-term projects in exploration, production and processing of hydrocarbon resources are held by profile concerns of Turkmenistan att he same time.

In future, it is planned to build several facilities of various capacity for deep processing of natural gas for production of goods with high added value in the country. Having pointed large profitability of these complexes and reliable regulatory and legal base in Turkmenistan creating the conditions for beneficial cooperation with foreign partners, the participants of the forum noted huge investment attractiveness of these projects.

Delegates of the Congress highlighted that opening of Turkmenbashy International Seaport created additional opportunities for cooperation in supply of petrochemical products made in Turkmenistan.

Reports on oil deposits in Turkmen sector of Caspian Sea where at present moment the works are carried out on thirty fields, which rational and efficient development caused by full accounting of the features of geological formation, were presented at the Congress.

Advanced drilling equipment from leading world producers allow drilling the wells with more than 7 thousand meters depth for exploration of the hydrocarbon deposits in deep horizons.

For example, exploration well with 7,150 meters depth was drilled at Uzynada field in the southwest of the country. The well test showed industrial flow of hydrocarbons. At present, its debit is more than 200 tons of oil and 150 thousand cubic meters of associated gas per day. Positive result of drilling undoubtedly increases the potential of oil and gas availability in coastal zone and entire Turkmen sector of the Caspian, the particpants of the forum highlighted.

Taking into account the perspective of this field, the State Concern Turkmennebit started drilling works at other two explorations well, which are to outline the borders of the field. The Concern also plans to start the realization of the plans for development of the fields in deep waters of Turkmen part of Caspian Sea, which potential resources are estimated in 18.2 billion tons in oil equivalent.

Numerous business meetings between foreign businessmen and managers of oil and gas departments and concerns of Turkmenistan were held during the Congress. Representatives of foreign companies made numerous investment proposals stipulating the use of latest technologies, scientific developments and advance practice in different spheres of oil and gas industry.