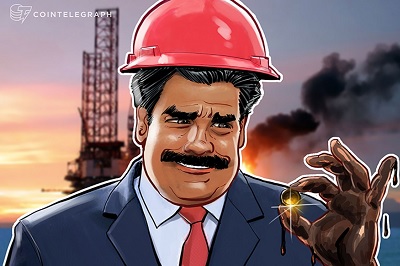 Venezuela decided to show the whole world a new way out of the crisis. The country has become the first country in the world to launch the national crypto currency El Petro, backed up by the country’s oil reserves.

Experts are quite skeptical about the Venezuelan crypto currency and the statements of Caracas. Caracas said already that it intends to release 100 million tokens El Petro. The provisional cost of one crypto unit with reference to the price of a barrel of Venezuelan oil is $60. Thus, it is expected that this measure will allow the country to attract about $6 billion.

The government was caused to take such a non-trivial step as the issuance of the national crypto currency El Petro by the economic crisis. The financial system based on the Bolivar is bursting at the seams: at the end of 2017, inflation in Venezuela exceeded 2610%.

The GDP of the country, according to the International Monetary Fund, will be reduced by 15%, and inflation will reach 13,000% by the end of 2018. Over the past year, the Bolivar devalued about 80 times.

Due to El Petro, the Maduro government intends to extinguish its national debt and expects to spend two-thirds of the payments to foreign investors on bonds to be redeemed in 2018. The authorities also guarantee that with the help of the new currency it will be possible to pay taxes, fines and government services. True, there are not sufficient technological conditions for this in the country.

The head of the agency for the creation of national crypto currency Carlos Vargas noted that El Petro can attract investors from Turkey, Qatar, the US and Europe.

On February 20, preliminary closed sales were started, scheduled to be held until March 19, after which the ICO will be launched. President Nicholas Maduro wrote on his Twitter that for the first day of preliminary sales of the new currency it was possible to raise $735 million.

However, the National Bank did not officially confirm this data, and information about investors was also not made public.