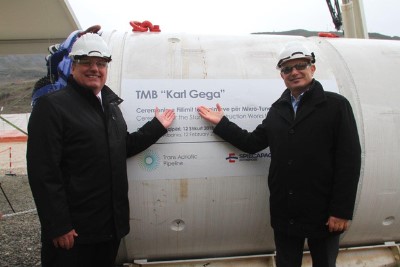 On February 12, the Trans Adriatic Pipeline (TAP), organised a ceremony to mark the start of works for the 1.5-km micro-tunnel, which will connect the east and the west segments of the pipeline in Albania.

Report informs citing the TAP consortium, the construction works for the micro-tunnel are expected to last approximately four months.About 50 more new jobs will be created locally.

The micro-tunnel will be comprised of a 560-metre East tunnel and a 600-metre West tunnel and it will have a 1.8-meter diameter.

The Deputy Minister of Infrastructure and Energy, Enis Aliko, stressed the importance of the TAP project for the Albanian economy: “It is the first time that this kind of operations and techniques are executed in Albania, part of an important project such as TAP. Moreover, I would like to congratulate TAP on the safety standards applied during the construction of the pipeline.”

TAP Project Manager for Albania Karl Roberts stated: “TAP is a key project part of the Southern Gas Corridor, enabling the future gasification of the Western Balkans and bringing a new source of gas to Europe. The micro-tunnel will be constructed using state-of-the-art technology with minimal human intervention, making it the safest method for the environment.”