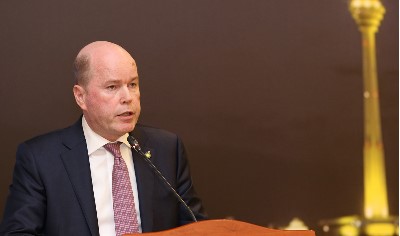 In case of discovery of gas reserves as a result of drilling a well in the promising Shafag-Asiman structure in the Azerbaijani sector of the Caspian Sea, the gas will be exported through the Southern Gas Corridor (SGC).

This was stated by the regional President of BP in Azerbaijan, Georgia and Turkey Gary Jones at a press conference.

According to him, the company plans to start drilling operations on this contract block in 2019.

Earlier, with reference to SOCAR, it was reported that the extraction of the first gas from the Shafag-Asiman structure could begin in 2030.

The depth of the first exploratory well on the Shafag-Asiman structure will be about 6,500-7,000 meters. While drilling, high pressure and temperatures are expected there. The depth of the sea in the area of ​​the structure ranges from 600 to 800 meters. According to preliminary data, the productive stratum is about three kilometers deep and starts from a depth of 5 km to 8 km. According to SOCAR, the reserves of the Shafag-Asiman structure are 500 bcm of gas and 65 million tons of condensate.

The contract for the development of the block between SOCAR and BP Exploration was signed in July 2010 and entered into force in June 2011. The parties’ participation in the contract is 50% to 50%. The contract is designed for 30 years with the possibility of extending for another 5 years.