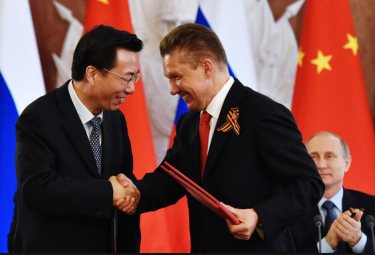 A regular meeting of the Joint Coordinating Committee (JCC) of Gazprom and CNPC moderated by Vitaly Markelov, Deputy Chairman of the Gazprom Management Committee, and Wang Dongjin, Vice President of CNPC, took place in Moscow.

The meeting reviewed the progress of concerted efforts of the companies in the course of 2017, as well as ongoing and future cooperation in key focus areas.

Specifically, a briefing was given on joint actions in the field of underground gas storage, gas-fired power generation in China, use of gas as a vehicle fuel, mutual recognition of standards by the two companies, occupational health and safety of oil and gas infrastructure personnel, and staff training.

The JCC co-chairmen approved the action plans for the JCC working groups for 2018. Developing gas resources and shaping gas transmission system in Eastern Russia operation between our companies is highly dynamic and has a dense business agenda. The regularity of our meetings and the increasingly wide range of topics we discuss are testament to how many common interests we have and how well we understand each other while moving in the same direction. Furthermore, the scale of the joint projects we implement is proof of the strategic importance and potential of our interactions,” said Vitaly Markelov.

Gazprom’s main partner in China is CNPC, a state-owned oil and gas company. In May 2015, Gazprom and CNPC extended the Agreement of Strategic Cooperation for five years.

In order to supervise the implementation of the Agreement, the Joint Coordinating Committee was set up by the companies. Pursuant to the decision of the Committee, working groups were established in the main areas of cooperation.

On May 21, 2014, Gazprom and CNPC signed the Sales and Purchase Agreement for Russian gas to be supplied via the eastern route (Power of Siberia gas pipeline). The 30-year Agreement provides for gas deliveries to China in the amount of 38 billion cubic meters per year.

In 2015, Gazprom and CNPC inked the Memorandum of Understanding for the project of pipeline gas supplies to China from Russia’s Far East.

In 2016, Gazprom and CNPC signed the Memorandum of Understanding on underground gas storage and gas-fired power generation in China and the Memorandum to explore the opportunities for cooperation in the NGV sector.

On July 4, 2017, Gazprom and CNPC signed the Supplementary Agreement to the Sales and Purchase Agreement for gas to be supplied via the eastern route inked in 2014. According to the document, gas supplies will commence on December 20, 2019.