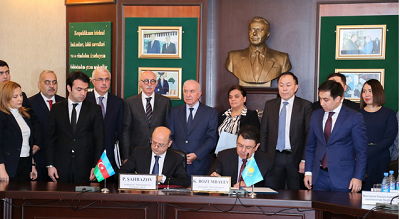 Delegation led by Kazakhstan’s Minister of Energy Kanat Bozumbayev has paid a visit to Baku to participate in XIV session of the Azerbaijan-Kazakhstan Joint Intergovernmental Commission on Trade and Economic Cooperation.

Report informs, after the bilateral meeting of the energy ministers of the two countries, the Intergovernmental Commission meeting was held under the co-chairmanship of Parviz Shahbazov and Kanat Bozumbayev.

Speaking at the meeting, Energy Minister, Co-chairman of the Commission P. Shahbazov noted that in addition to ethnic-historical roots, important aspects such as geostrategic position, rich energy resources, location on the East-West, North-South energy and communications corridors bring Azerbaijan and Kazakhstan closer. It was stated that the two countries have a similar stand on issues such as production of energy carriers and export to the world market. P. Shahbazov said that the relations between the two countries are developing on the basis of alliance and strategic partnership.

Kazakh Minister of Energy, Co-chairman of the Intergovernmental Commission K. Bozumbayev appreciated current level of relations between the countries and said that today’s meeting will give impetus to the development of many fields, especially energy, agriculture and industry.

Then, the sides discussed the works carried out in the relevant areas mentioned in the Protocol of XIII Meeting of the Intergovernmental Commission in Astana on September 22, 2016. The current state of relations in the field of trade and economy was considered. It was noted that volume of trade turnover between the two countries during the first nine months of this year increased by 3.7% to $ 102.5 million. Exports from Azerbaijan to Kazakhstan increased by 7.3% to $ 21.8 million and import by 2.7% to $ 80.7 million.

Energy sector was also paid attention to as one of the main directions of cooperation between the two countries. It was emphasized that Azerbaijan and Kazakhstan’s energy cooperation passed a long way in the example of the Baku-Tbilisi-Ceyhan oil pipeline project. It was noted that transportation of hydrocarbon resources from the territory of Azerbaijan to Batumi and Kulevi oil terminals holds main place in the cooperation in the fuel and energy sector. 835.1 thousand tons of Kazakh oil was transported through SOCAR Trading in 2016 and 3,500 tons within 10 months of 2017.

The meeting also touched upon the issues of cooperation in the field of transport.