After all the craziness in Europe’s gas markets this week, some relief supplies may already be on their way from deep in the Russian Arctic. 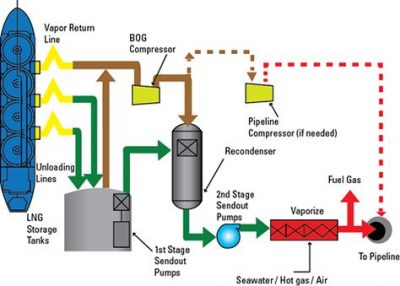 Petroliam Nasional Bhd, the Malaysian energy giant known as Petronas, is said to send the first tanker from Russia’s $27 billion Yamal LNG project to a U.K. port outside London.

The highest prices in four years after a pipeline defect shut a North Sea oil and gas network and an explosion crippled a key connection point in Austria made northwest Europe much more attractive as a destination for tankers carrying the super-chilled fuel. This week’s spike narrowed the difference with costs for liquefied natural gas in northeast Asia, the world’s biggest importing region, and widened the British premium over U.S. prices to the highest since 2014.

LNG is the fastest growing sector of the natural gas industry and its main appeal to both producers and traders is the flexibility of picking destinations where prices are highest.

“We might well see some competition between Europe and Asia to attract LNG this winter,” said Massimo Di-Odoardo, an analyst at Wood Mackenzie Ltd. in London.

The only confirmed tanker to the U.K. is a ship from Qatar due to arrive on Wednesday. The Yamal LNG cargo could arrive withing five days, according to calculations using shipping website sea-distances.