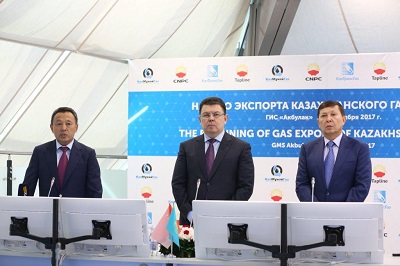 The KazTransGas national operator has begun exporting domestic gas to China with the ceremony launching Kazakh gas from the Beineu-Bozoy-Shymkent main gas pipeline to the Central Asia-China transnational gas pipeline held at the gas operator’s centralized dispatch center in Astana, the company’s press service has said. 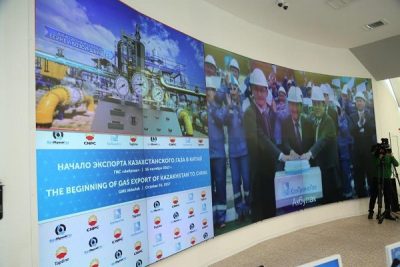 During the ceremony, export of domestic gas to China was launched by means of online communication from the Akbulak gas measuring station near the city of Shymkent.

“Today we are witnessing a historic event. The successful work of the KazMunaiGas national company and the KazTransGas national operator have resulted in the conclusion of a contract with the Chinese side on gas supplies for export. Historically, Kazakh gas used to be supplied to Europe through the Russian Federation and it is very important that now Kazakhstan has an alternative: 5 billion cubic meters of gas exported to China is just the beginning, the first step. We have the technical capability and throughput of gas pipelines to supply 10 billion cubic meters [per year]”, Bozumbayev was quoted as saying during the gas export launch.

It was reported that Kazakhstan was planning to supply five billion cubic meters of gas to China per calendar year with export revenue expected to be around $1 billion.

The sale agreement was signed by KazTransGas and PetroChina International Company Limited. Gas will be delivered from fields in west Kazakhstan and from the underground gas storage facilities of KazTransGas to the Khorgos border checkpoint. The export natural gas route through Kazakhstan is 3,000 km long with over 10 compressor stations involved in the transportation operation.