...from Azerbaijan to World Market 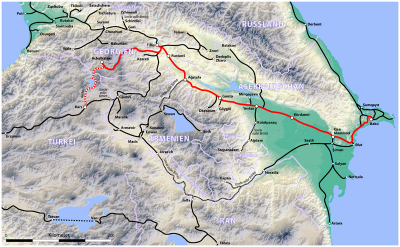 Today, in the village of Alyat (75 km south of Baku), the opening ceremony of the Baku-Tbilisi-Kars railway (BTK) will take place.

At the opening ceremony, in addition to the Azerbaijani President, the heads of state of Turkey, Georgia and Kazakhstan will take part.

BTK is one of the largest transport projects in the region.

The BTK railroad was built on the basis of the Azerbaijan-Georgia-Turkey interstate agreement, which was signed in February 2007.

It should be noted that cargoes between China and the West are mainly planned for this road. However, after commissioning SOCAR subsidiaries SOCAR Carbamide (700,000 tons a year and 70% for export) and SOCAR Polymer (570,000 tons, of which about 70% will go for export) in Sumgait after 2018 and in the following years after reaching the designed capacity of the SOCAR Methanol plant (650-700 thousand tons per year, almost 95% to be exported), Turkey, Georgia and European countries will become one of the markets for the products of these enterprises. The best way to deliver goods to these countries will naturally be the BTK railroad. In addition, in 2021, the modernization of the Baku refinery will be completed, which will produce Euro-5 quality products. Azerbaijan will then have an opportunity to supply about 2 million tons of oil products annually for export.

The Minister stressed that Azerbaijan implements its strategic projects with fraternal Turkey, including such projects as the TANAP gas pipeline, the BTK railway, the Star oil refinery, the Shah Deniz project, the South Caucasus gas pipeline, etc.