A new contract on development of the Azeri-Chirag-Gunashli (ACG) block of oil and gas fields is planned to be signed in a few days, said Azerbaijan’s President Ilham Aliyev. 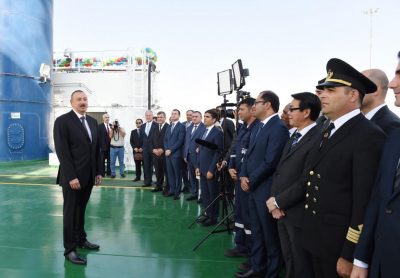 He made the remarks in Baku Sept. 6 at a ceremony to launch a new subsea construction vessel for the Shah Deniz Stage 2, built by Baku Shipyard under an order by BP.

“We will prolong our activity at this field until 2050. This once again demonstrates that Azerbaijan has very big oil reserves,” noted the president.

“I remember that in 1994, when the Contract of the Century was signed, some ill-wishers both inside the country and foreign forces were alleging that there is not enough oil in Azerbaijan, that there is little oil at the Azeri-Chirag-Gunashli, and there is no need for construction of any pipeline, because that pipeline will remain empty,” said President Aliyev. “We have been producing oil and gas from the Azeri-Chirag-Gunashli fields for 20 years.”

The head of state added that production at the ACG started in 1997 and after 20 years a new contract is being signed, under which, oil will be produced in a sufficient volume from Azeri-Chirag-Gunashli until 2050.

This is a response to negative and prejudiced opinions, the president noted, adding this also demonstrates that Azerbaijan has a very big energy potential.