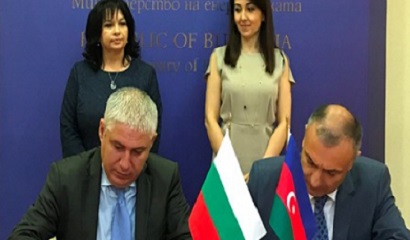 Bulgarian gas transmission system operator Bulgartransgaz and Azerbaijan’s state-run Socar signed an MOU July 18 to look into shipping natural gas to Bulgaria and transporting it on to other southeastern European countries.

According to Socar sources,  the company’s Balkan subsidiary will study options for supplying additional amount of gas to Bulgaria beyond the existing contract for 1bn m³/yr of gas from the Shah Deniz II development from 2020.

“Socar is ready to examine the technical and commercial capacity of the existing transmission system, operated by Bulgartransgaz, including its future extensions, such as by building the Balkan gas hub for the transit of additional volumes of gas through the Southern Gas Corridor across Bulgaria to other European markets,” Bulgaria’s energy ministry said in a statement.

The additional gas volumes for it may be allocated from the new upstream projects in Azerbaijan. Earlier Bulgaria’s  deputy energy minister Zhecho Stankov said that Bulgaria considers exporting additional about 3bn m³/yr from Azerbaijan.

Bulgaria, which gets over 95% of its gas from Russia’s Gazprom, plans to build a gas hub at the Black Sea port of Varna and attract both Azeri and Russian gas.

“Main priority in the energy sector for the government is to ensure energy security, as well as diversification of supply sources and routes for natural gas. For its implementation we rely to a great extent on our co-operation with Azerbaijan,” said  Petkova.