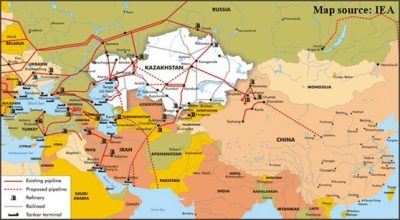 In April of this year, a memorandum of cooperation was signed between the Russian Energy Ministry and Uzbekneftegaz, which envisages the creation of a working group with the participation of representatives of Kazakhstan.

At present, the parties have begun to explore options for implementing a mechanism for the supply of oil from Russia to Uzbekistan through Kazakhstan.

It should be noted that Uzbekistan will build an oil pipeline to the border with Kazakhstan to supply raw materials to a new oil refinery, the construction of which began in the Jizzakh region in April this year.

The length of the pipeline is 95 km. It is supposed that it will be connected to the existing oil pipeline Omsk-Pavlodar-Shymkent for the supply of imported oil from Russia and Kazakhstan.

The Jizzakh region is located in the central part of Uzbekistan and borders on Kazakhstan in the north, which will facilitate the construction of the oil pipeline.