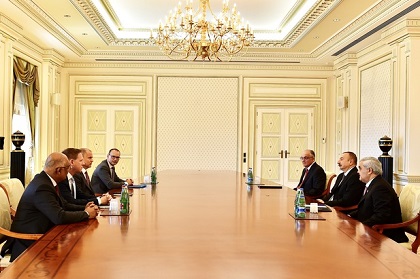 Azerbaijani President Ilham Aliyev received yesterday in Baku the Executive Vice President for development and production of the Norwegian company Statoil Lars Christian Bacher, the website of the head of state reports.

“During the meeting, the sides discussed prospects for further cooperation of Azerbaijan with Statoil,” the information says.

Turan notes that the Vice President of Statoil will take part in the opening ceremony of the annual Caspian Oil & Gas -2017 exhibition in Baku on May 31, and on June 1 he will speak at the Marriott Absheron Hotel with the same title on “Shaping competitive solutions for the future”.

In addition, on March 14, the leadership of the Baku office of Statoil, at a meeting with the Azerbaijani Energy Minister, expressed their desire to develop small gas condensate fields on the Azerbaijani shelf of the Caspian Sea, which were discovered in the late 1990s and at the beginning of the last decade.

At present, Statoil is represented in two Azerbaijani projects: Azeri-Chirag-Guneshli (upstream, 8.7%) and Baku-Tbilisi-Ceyhan (downstream, 8.6%) pipeline. In 2014, the Norwegian company completely abandoned the gas project Shah Deniz and the South Caucasus gas pipeline, selling its entire share of 25% to BP, SOCAR and Petronas for $ 3.37 billion. A year later, it sold for € 208 million its 20% share in the Trans-Adriatic Gas Pipeline (TAP) project and thus left all the gas and infrastructure projects related to Azerbaijan.