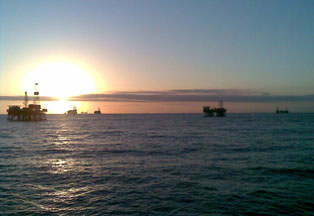 SOCAR will produce about 300 mcm of gas and about 55 thousand tons of condensate per year due to commissioning a new well that is being drilled on a large offshore field Bulla-Deniz.

SOCAR reports the project depth of the well is 6,200 meters and the daily debit is expected to reach 800 thousand cubic meters of gas and 150 tons of condensate.

Note that the gas condensate field Bulla Deniz has been operated since 1975. During this time, the field has produced over 62 bcm of gas and 12 million tons of gas condensate. In 2013, SOCAR exploration drilling opened new gas reservoirs at a depth of 6 thousand meters. After that it was decided to develop these resources. In 2016, a new platform was built on the field, and in the current year it is planned to put another platform.