The Oil and Gas Extracting Department (OGED) Oil Rocks (the structure of Production Association Azneft SOCAR) for the first time in 2016 brought the annual volume of oil production from producing fields to 1 million tons, according to the press service of SOCAR. 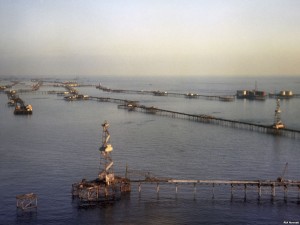 Over the past three years OGED Oil Rocks drilled and commissioned 54 wells, carried out 309 geological and 1,584 technical activities. Efficient work was carried out with the well stock, new equipment and technology was introduced, downtime was avoided and the cost of oil production was reduced.

* OGED Oil Rocks develops the fields Oil Rocks and Mud Volcano. These areas were established in 1949 and began to be developed in 1952. Over the entire period of operation, 2,211 wells in the field Oil Rocks produced 182.861 million tons of oil and 14 billion 92 million cubic meters of gas.