Despite the turbulence in the commodity markets in 2016, the year ended on a high note for the London-based integrated company, BP Plc. While the energy company’s stock price as well as profitability suffered throughout the year, the company recovered strongly in the second half of the year on the back of the Organization of Petroleum Exporting Countries’ decision to cut down almost 1.2 million barrels of oil per day from its cumulative oil production. The move led to a strong improvement in the outlook for the commodity markets, motivating large integrated companies to ramp up their investments in conventional and unconventional markets. 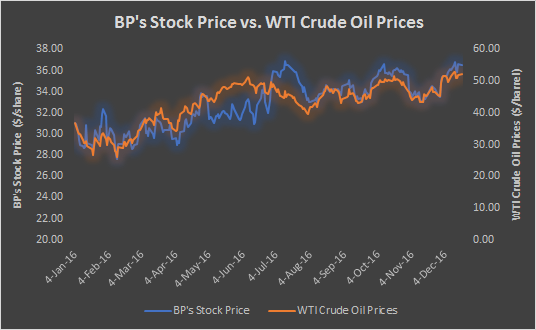 With the anticipation of a rebound in commodity prices, BP has made some meaningful deals across countries over the last two months in order to expand its operations and recoup its lost value. Last month, the company announced a series of transactions to acquire interests in some of the high quality oil and gas assets in Abu Dhabi, Western Africa, and Egypt. These transactions were aimed at leveraging the reversal in commodity prices over the next few quarters and enhancing the company’s long term growth prospects with the use of advanced technology and experience in the industry. For more information on these deals, read our previous analysis, BP Is On A Shopping Spree To Expand Its Operations, where we describe each of these deals and the rationale behind them in detail. Apart from the above mentioned transactions, BP has declared a few more agreements in the last week of 2016, not only to compete with its competitors, but also to efficiently utilize its financial resources and execution capabilities which have been recently freed up from the claims of the 2010 oil spill. Here is a brief analysis of the new deals announced by the company:

Last week, BP announced its strategic partnership Woolworths Group (Woolworths), one of Australia’s largest supermarket retailers. Under the agreement BP aims to acquire, rebrand, and operate Woolworths’ existing 527 fuel and convenience sites across Australia, as well as an additional 16 sites (currently under construction), for a total consideration of US$1.3 billion . A new fuel and convenience offer called “Metro at BP” will be launched under the deal that will offer high-quality, ready-to-eat and take home fresh food products, apart from BP’s quality fuels, and Woolworths’ Everyday Rewards. The two companies plan to launch the Metro at BP pilot program across 16 BP fuel and convenience sites, after which it will be expanded to more than 200 sites, based on the initial performance.

The agreement comes as a part of BP’s global strategy and is likely to add to the company’s existing network of 350 company-owned retail sites across Australia. In addition to these stores, BP also supplies fuel and branding to more than 1,000 sites owned by independent business partners in the country. This deal is aimed at replicating the success of its Marks & Spencer (M&S) Simply Food tie-up in the UK, where it provides convenience retail offerings to its customers to meet the needs of their busy lifestyles. With BP’s international experience and expertise in fuel and convenience stores, and Woolworths’ network, these stores could generate a great upside for the customers, and in turn, for BP’s investors.

In late December, BP-operated AIOC (the Azerbaijan International Operating Company) and SOCAR (the State Oil Company of the Republic of Azerbaijan) signed an agreement for the future development of the Azeri-Chirag-Gunashli field in the Azerbaijan sector of the Caspian Sea. The deal entails the development of the ACG field, the biggest producing oil field in the Caspian Sea covering an area of more than 432 square kms, until 2050. The field began production of oil in November 1997, and has produced more than 3 billion barrels of oil equivalent (boe) with around $33 billion of investment. It currently produces roughly 620,000 boe.

While AIOC is owned by a number of large companies such as Chevron, INPEX, Statoil, ExxonMobil, TPAO, ITOCHU, and ONGC Videsh, BP holds a major share in the company and continues to act as the operator of the project. Given BP’s association with the project and the country for more than two decades, the deal is likely to enable the company to utilize its technical knowledge and expertise to derive maximum value from the assets for Azerbaijan, its partners, and, more importantly, for its shareholders. 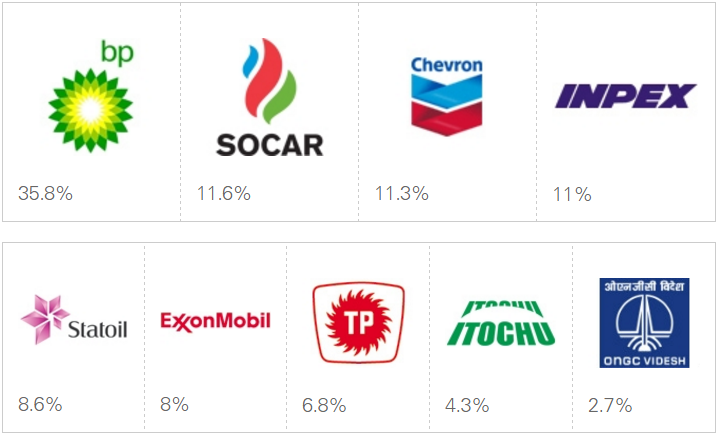