According to a combination of official statistics and NGW’s survey, the country’s total gas export also stood at 7.78bn m3, so 625mn m3 less than 2015.

Azerbaijan plans to complete the second phase of Shah Deniz gas field, expected to become operational initially next year, as well as keeping the SD1 output high. Aliyev said that it is expected more than 10bn m3of gas to be produced from SD1 in 2017, compared to 9.9bn m3 last year.

OPEC members agreed November 30, 2016 to decrease oil output by 1.2mn b/d to 32.5mn b/d, while some non-Opec countries including Azerbaijan accepted to reduce the production level by 558,000 b/d in 1H17 on average.

Aliyev said that his country is fully committed to its obligations under the oil deal and has reduced output by 35,000 b/d since January 1. He said that the country’s total oil production was 789,000 b/d during January 1-20 in the line with this pledge. That compares with its November production of 830,000 b/d while Opec had estimated its figure for October at 865,000 b/d, he added. 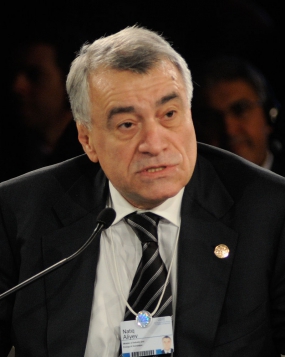 He added that the oil price in January increased by $25/b year-on-year and this favours all producers. Azerbaijan can cut oil output even more if other producers decide to shrink the production level to support prices, he said.

BP and Azerbaijan’s state Socar signed a principles of agreement document on December 23 outlining future development of ACG out to 2050, under continued BP leadership, which said total ACG oil and gas production at that point in time was roughly 620,000 barrels of oil equivalent per day.