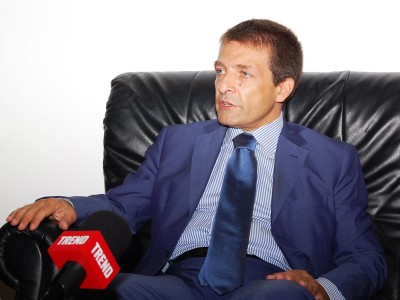 The Southern Gas Corridor is a very important factor of Azerbaijani economy’s development, it is a huge project with huge investments, Italian Ambassador to Azerbaijan Giampaolo Cutillo told Trend Nov. 23.

After big investment, Azerbaijan will have revenues coming back, so this will create an important partnership between Europe, Italy and Azerbaijan, he said.

“I believe it is one of the key factors of Azerbaijan’s future,” Cutillo noted.

The Southern Gas Corridor is one of the priority energy projects for the EU. It envisages the transportation of 10 billion cubic meters of Azerbaijani gas from the Caspian region to the European countries through Georgia and Turkey.

The Italian ambassador mentioned very friendly relations between Azerbaijan and Italy, as well as the recent visit by Italian Minister of Foreign Affairs and International Cooperation Paolo Gentiloni, who came with representatives of many Italian companies to Azerbaijan Nov. 7.

It is a continuous process of meetings, which take place every two or three months, Cutillo noted, adding that Azerbaijan and Italy carry out high level meetings within the two governments.

Italy will take over the presidency in the OSCE in 2018, so it is an important role for the country, because the OSCE also deals with frozen conflicts, including the Nagorno-Karabakh conflict, which will be one of priorities for Italy, he added.

The conflict between the two South Caucasus countries began in 1988 when Armenia made territorial claims against Azerbaijan.

As a result of the ensuing war, in 1992 Armenian armed forces occupied 20 percent of Azerbaijan, including the Nagorno-Karabakh region and seven surrounding districts. The 1994 ceasefire agreement was followed by peace negotiations.

Armenia has not yet implemented four UN Security Council resolutions on withdrawal of its armed forces from the Nagorno-Karabakh and the surrounding districts.