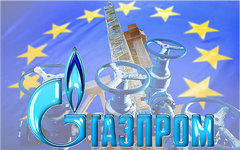 Europe will harder follow the conclusion of gas contracts of the European Union (EU) with foreign companies, including those with Gazprom: if the only exporter covers the lion’s share of the country’s needs for the blue fuel, then the transaction will have to be reported to the European Commission (EC) and national regulators. They will have the right to examine the price before its conclusion.

According to the estimates of Rossiyskaya Gazeta, this rule may complicate Russian deliveries to 10 EU member states out of the 16 consuming gas from Russia.

The bill, which introduces new rules, has already been approved by the European Parliament Committee on Industry, Research and Energy. Its adoption could take about two years. So, within the EU there are plans to create a system of cross-flow of gas between seven “regions of cooperation”, uniting several countries. A “solidarity mechanism” for gas supplies will work: if a country suddenly stops receiving gas, compensatory volumes will be supplied from other members of the transnational region.

In addition, when negotiating with gas companies for the construction of energy infrastructure, the EU countries will be obliged to consult with the EC, and the energy contract details for a period of more than one year, including the price of gas, will have to be reported to the EC.

The bill was first submitted for consideration in February 2016. It was originally assumed that the restrictions will affect contracts that allow a single provider to ensure the country’s gas needs for more than 40 percent. If this point is preserved in the document and if it is adopted, the contracts of Russia with ten countries might be revised.

According to the level of gas supply in 2015 (the data from Gazprom  Export) and the volume of the national consumption of gas (the Eurogas data), the index above 40 percent regards Austria, Bulgaria, Hungary, Germany, Greece, Poland, Slovakia, Slovenia, Finland and Czech Republic. In 2014, these countries, according to the EC data, were more – 13 out of the 28 EU member states.

For Russia, the introduction of this rule means that it will have to not only reduce the volume of supply, but also to offer more attractive conditions for the purchase of gas, for example, at prices close to spot prices, which Europe enjoys from Norway (ranked second on gas export share to the EU after Russia ).