The Azerbaijani President Ilham Aliyev participated in the ceremony of sending a support block to the sea for the production platform under construction in the framework of Stage-2 of the Shah Deniz field, the site of the head of state reported.

The ceremony was held at the Baku Deepwater Jackets Factory named after Heydar Aliyev, which carried out the construction of this object.

It should be noted that the general contractor of the construction of the support block is the consortium of BOS Shelf LLC (it was established in 2001 on a parity basis between SOCAR and the Star Gulf FZCO, UAE), Saipem Contracting Netherlands B.V. and Star Gulf FZCO. The contract was signed in Baku on April 10, 2014. The contract value of the work is $ 750 million. The same company assures delivery of the support blocks to the installation point. 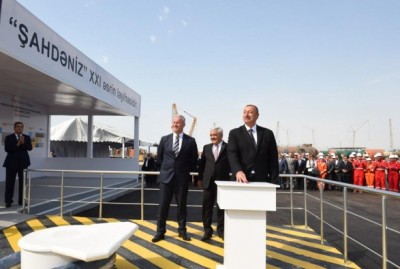 As it became known to Turan from sources in BP, the second support block will be sent to the point later. In the summer of 2017 the support blocks will be installed and mounted upper platform modules, which after a year will ensure production within the project Shahdeniz-2.

Note that for the first time in the Caspian Sea hydrocarbon production (gas and condensate) will not be carried out from the platform. Because of the big depth of the seabed in the contract area (550 meters), the platform is installed in the shallow part of the deposit, and the very production will be carried out by means of manifolds (robotic subsea production systems) and hydrocarbons will be delivered first to the platform, and then after the initial treatment they will be transported to the coastal terminal Sangachal. 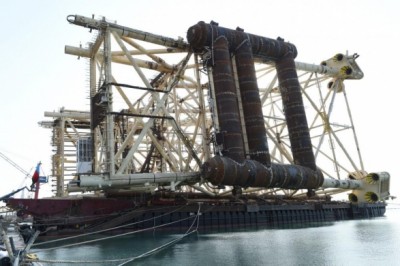 On December 17, 2013 in Baku, the shareholders of the consortium Shah-Deniz signed the final investment decision for the Stage 2 development of this field.

The project Phase-2 involves the construction of two platforms, the drilling of 26 subsea wells, the laying of a 500-kilometer subsea pipeline at a depth of 550 meters, the expansion of the Sangachal terminal, and the expansion of the capacity of the South Caucasus Pipeline (Baku-Tbilisi-Erzurum) for the supply of additional 16 bcm of gas.