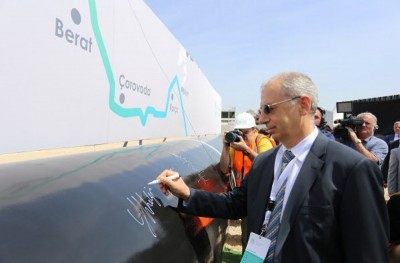 The Trans Adriatic Pipeline AG (TAP) announced the arrival of the first steel line pipes and machinery for the construction of the Albanian section of the pipeline. The occasion was marked by a ceremony in the Main Marshalling Yard of TAP, in the vicinity of Durrës. The ceremony was attended by Prime Minister Edi Rama, Minister of Energy and Industry Damian Gjiknuri, representatives of local authorities, TAP contractors, Albanian companies and other stakeholders.

Prime Minister Rama and Minister Gjiknuri underlined the importance of TAP for Albania as one of the most important energy projects in the region and its contribution to positioning Albania as a player in the European energy market. They emphasised that TAP will have a positive impact in promoting economic development, creating new opportunities for Albanian businesses and developing the country’s energy infrastructure.

TAP’s Country Manager Shkëlqim Bozgo said: “After the start of Access Roads and Bridges, in July of last year, the arrival of pipes, bends and machineries marks the beginning of a new and very dynamic phase for TAP in Albania. We look forward to starting the construction of the Albanian section of the pipeline by the beginning of the second half of this year. TAP is a major project and its successful implementation will be the result of the efficient cooperation of all relevant stakeholders. TAP is thankful to the excellent support provided by the Albanian central and local government and local communities. It will bring significant positive impacts to Albania during the construction phase and in the long run.”

TAP’s Project Manager in Albania Karl Roberts stated: “Delivering such a challenging project like TAP requires commitment, dedication and support from many professional Contractors and colleagues in TAP. I am very pleased to say our Albanian Contractors have demonstrated their strength and capability in the work that has been completed to date with a world-class safety record. I am really excited about the project as it moves into the next stages of construction as we continue to deliver success.”

TAP will transport natural gas from the giant Shah Deniz II field in Azerbaijan to Europe. The 878 km long pipeline will connect with the Trans Anatolian Pipeline (TANAP) at the Turkish-Greek border at Kipoi, cross Greece and Albania and the Adriatic Sea, before coming ashore in Southern Italy.

TAP’s routing can facilitate gas supply to several South Eastern European countries, including Bulgaria, Albania, Bosnia and Herzegovina, Montenegro, Croatia and others. TAP’s landfall in Italy provides multiple opportunities for further transport of Caspian natural gas to some of the largest European markets such as Germany, France, the UK, Switzerland and Austria.

TAP will promote the economic development and job creation along the pipeline route; it will be a major source of foreign direct investment and it is not dependent on grants or subsidies. With first gas sales to Georgia and Turkey targeted for late 2018, first deliveries to Europe will follow approximately in early 2020.