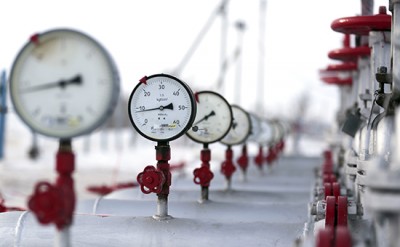 President Vladimir Putin has proposed new links to Europe via the Baltic and Black Sea that would bypass an existing transit corridor through Ukraine as tensions between the former Soviet allies grow. The European Union is seeking to cut its dependence on Russian gas after shipments were interrupted twice in the past decade over disputes between Moscow and Kiev.

A new southern link toward Greece and Italy, being considered by Russia, is a “political project with a political goal,” Amos Hochstein, U.S. special envoy for international energy affairs, said Monday in an interview in Baku, the capital of Azerbaijan. The various proposals “are simply restating political projects that have questionable economic value especially in these market conditions.”

Gazprom PJSC last week signed a memorandum of understanding with Edison SpA and Depa SA on a possible pipeline project to deliver gas from Russia through the Black Sea, which could use works made for other links, including an undersea connection called Poseidon between Greece and Italy. That project may compete with the U.S.-backed Trans-Adriatic Pipeline, or TAP, that will ship Azeri gas to those EU nations from the Turkish border.

Phase Two of the BP Plc-led Shah Deniz deposit in Azerbaijan’s section of the Caspian Sea will export at least 10 billion cubic meters of gas to Greece, Albania, Bulgaria and Italy from 2020. The project is 66 percent complete, BP’s Baku office said on Monday.

Putin canceled plans to build the South Stream link through Bulgaria in 2014, citing EU opposition, and announced an alternative route through Turkey. That project, known as Turkish Stream, was shelved last year as relations between the countries soured over the conflict in Syria. Russia supplies about 30 percent of Europe’s gas.

“Europe doesn’t need new mega projects that cost tens of billions of dollars that simply take the same gas from the same Russian fields to the same European consumers,” said Hochstein. He was visiting Baku with EU foreign policy chief Federica Mogherini and EU Vice-President for Energy Union Maros Sefcovic to reiterate support for the $45 billion Southern Gas Corridor project, which TAP is a part of.

TAP will link up with the 1,850-kilometer Trans-Anatolia Pipeline, or Tanap, that’s under construction in Turkey. Socar leads the $11 billion project, with other partners including BP and Turkey’s state pipeline company Botas Boru Hatlari Ile Petrol Tasima AS.

Tanap will receive Azeri gas via the South Caucasus Pipeline Extension, which is under construction by a BP-led group. The link will connect the Sangachal terminal near Baku with the Georgian-Turkish border.

“We aren’t looking to exclude Russian gas from European market,” Hochstein said, citing the transit pipeline through Ukraine. “But what we are suggesting is that European countries should be able to choose their supplier and force their suppliers to compete for their business. That is what is good for energy security of Europe, economic security and ultimately for the national security of those countries involved.”

Gazprom will assess the new southern gas link via the Black Sea by the end of this year, its head Alexey Miller said on Monday.