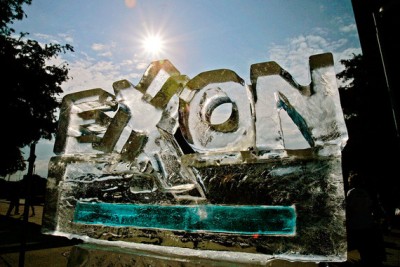 The plunge in oil prices Is taking a massive toll on the bottom line of energy giants, with,Exxon Mobil’s earnings tumbling 58% in the fourth quarter. But the company beat estimates as its profits from refining increased.

The company lost $538 million in its upstream business during the quarter, largely in production and exploration. But it earned an additional $854 million in its downstream unit, which includes  refining, and $436 million of that total was in the U.S. Falling oil prices typically aid refiners by increasing their margins as they pass along the cost savings to consumers with a lag.

“The scale and diversity of our cash flows, along with our financial strength, provide us with the confidence to invest through the cycle to create long-term shareholder value,” Exxon CEO Rex Tillerson said.

Other oil giants have suffered losses. BP said Tuesday it lost $3.3 billion in the fourth quarter and $6.5 billion in 2015. Chevron last week said it lost $588 million in the quarter, its first quarterly deficit in 13 years.

U.S. benchmark oil prices fell 36% last year and about 20% in the fourth-quarter, closing out 2015 at $38.23. Many analysts  expect unusually low crude prices to persist until the second half of this year as a result of weak global demand and record supplies fueled largely by strong US production.

Producers, in turn,are scaling back production and exploration projects. ExxonMobil’s capital and exploration expenditures totaled $7.4 billion in the fourth quarter, down 29% from the year-ago period.