State Oil Company of Azerbaijan Republic (SOCAR) will look to international markets to pay for its share of new gas pipelines to Europe. Faced with sharply lower oil prices and a likely $6 billion bill for its stake in the Trans-Anatolian Pipeline (TANAP), SOCAR has decided on a bond issue to raise the cash. 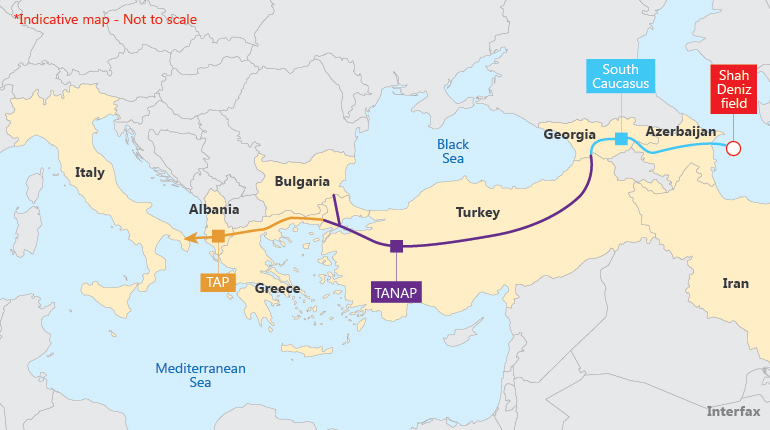 Consequently, Baku will place bonds worth $2 billion on international financial markets later this month. Samir Shafirov, the country’s finance minister, announced the decision in late January after holding talks with international financial institutions about a possible bail-out deal for Azerbaijan. The country’s economy has been hard hit by the plummeting oil price.

Gulmira Rzayeva, a senior research fellow with the Centre for Strategic Studies in Baku and a research associate with the Oxford Institute for Energy Studies, explained that SOCAR’s stakes in the three Southern Gas Corridor (SGC) pipelines will be financed in part by Azerbaijan’s sovereign wealth fund (SWF), but that SOCAR has to find nearly half the money itself.

“The state oil fund will finance 51% of the cost,” Rzayeva explained, leaving SOCAR to find the remaining 49%. SOCAR has shares in projects up and down the value chain in Azerbaijan, Rzayeva said, and needs to raise a total of $10-12 billion to meet its commitments. The SWF has about $34 billion obtained from Azerbaijani oil and gas projects, “so there is no need to raise money for the government share”, Rzayeva noted.

Azerbaijan’s 2016 budget provides AZN 1.82 million (around $1.1 billion) in government funding for TANAP, but SOCAR – which is feeling the effects of sharply lower revenues – must contribute a similar amount. Its bond issue is intended to raise finance for all segments of the SGC, Rzayeva said.

The SGC encompasses three pipeline projects, all of which are joint ventures. SOCAR has equity in each segment, but TANAP is the only one in which it holds a majority share. TANAP is intended to connect the existing South Caucasus Pipeline, which is due to be expanded, with the Trans-Adriatic Pipeline, which will run through Greece and Albania to Italy.

TANAP will cross the breadth of Turkey – more than 1,800 km – from the border with Georgia in the east to Greece and Bulgaria in the west.

SOCAR sold 12% of TANAP to BP last year, while Turkey’s Botas owns 30%. The cost of the project is estimated at approximately $10 billion.

TANAP is distinctive in another important way than SOCAR’s controlling stake. Unlike the other pipelines, it is not seeking project financing. “It was conceived at a time when the price of oil was well over $100 per barrel,” said a source close to the project.

“SOCAR wanted a project it could control, but did not want the complexities of project financing,” as this would probably have involved a lender such as the International Finance Corp. (IFC). “The IFC has onerous requirements for such financing that go well beyond financial and technical issues to environmental and social considerations,” the source added. The experience of the original Caspian link, BP’s Baku-Tbilisi-Ceyhan pipeline, is evidence of this.

Commenting on the proposed bond issue and the news that representatives of both the International Monetary Fund and the World Bank had visited Baku last week to discuss a possible rescue package, Ed Chow, a senior research fellow with the Center for Strategic and International Studies in Washington DC, said recent events reflected Azerbaijan’s over-dependence on oil and an unwillingness to diversify its economy and think long term.

“At a time of high oil prices, countries create rainy-day funds that provide a cushion for when prices come down, but they are supposed to be invested in things that help your economy diversify,” Chow said. This has not happened in Azerbaijan.

“They have spent windfall profits from oil on vanity projects that benefit a group of individuals favoured by the regime and make the economy uncompetitive,” Chow said. By reinvesting profits from hydrocarbon projects into the oil and gas industry Azerbaijan is “putting more eggs in the same basket”, he added, instead of diversifying or investing in services or social infrastructure.

“It is a mistake to put money back into oil and gas,” Chow said, pointing out that it is over-dependence on oil that led to the budget deficit driving SOCAR to look to international markets for funding.