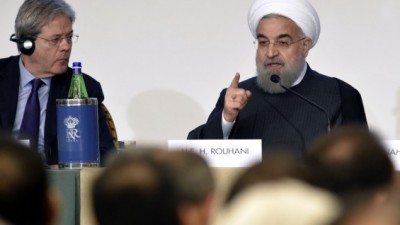 During his visit to Paris Iranian President Khasan Roukhani has signed an agreement with France worth €15 billion, Reuters quotes French diplomatic source.

The main result of Roukhani’s visit to Rome was a package of 17 agreements (total amount of the deals reached about €17 billion). The talks with Italian giants in the energy and metallurgical fields have been the most resultative. Oil service company Saipem and metallurgical group Danieli have concluded big contracts with the Iranian partners. Saipem will upgrade oil refinery in Shiraz and Tebriz, on the south of Iran, and    will also build 1,800-km-long pipeline. The cost of the contracts between Saipem and Iranian National Gas Company and Persian Oil & Gas Company totals 5 billion Euro.

A group of Danieli companies has concluded an agreement with the Iranian authorities and businessmen to the amount of about €5.7 billion – creation of Persian Metallics JV with the capacity of 6 million tons of iron-ore pellets a year (co-investors have not been named) is estimated at €2 billion and the contracts for delivery of equipment for steel making and aluminum manufactures are estimated at another €3.7 billion. Italian Condotte d’Acqua, which specializes in development of infrastructure projects, has also broken into the Iranian market (the sum of the contracts is estimated at €4 billion).