As Middle East nations look to build up their weaponry amid regional civil wars, that arms race is now at risk of grinding to a halt. The price of oil kept sliding Tuesday, past the point where the oil-based economies in the region are able to balance their budgets. 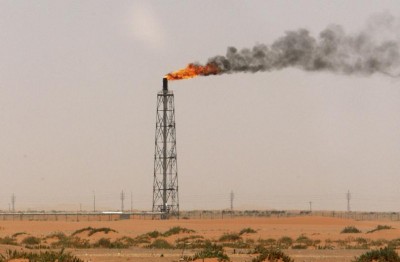 In particular, Saudi Arabia, Iran and the United Arab Emirates are among the countries whose economies are strongly pegged to the price of oil, which is expected to keep falling well into the new year. But while their respective budgets will likely see swift reductions across domestic spending, their funds set aside for defense will almost certainly have to be slashed as well, said energy and defense experts, who predict a ripple effect on the U.S. military industrial complex with major orders being scrapped as cash reserves becomes scarce.

“For a lot of these countries that are currently investing pretty substantially in defense capabilities, the lower price of oil is definitely an issue,” said Andrew Hunter, a senior fellow in the International Security Program and director of the Defense-Industrial Initiatives Group at the Center For Strategic and International Studies (CSIS), a Washington, D.C.-based think tank.

“At least to date, most of these countries understand that the oil market is a pretty volatile and sometimes cyclical one, and therefore the price drops they perceive [are] an almost temporary phenomenon, so they tend not to panic and stay the course until prices navigate towards a steady state position. The question here is: ‘When does it start to become a little too painful for those countries?’” he asked rhetorically.

That question was answered in part late last year when the military and economic powerhouse of the Middle East, Saudi Arabia, slashed its annual budget to address a huge 15 percent gap in its budget, a symptom of the increasingly low price per barrel of oil, which slid from $105 in June 2014 to just above $30 Tuesday, a 12-year low.

Its fellow Gulf countries, Oman, Kuwait, United Arab Emirates, Bahrain and Qatar, whose economies are all also heavily linked to oil, already began the difficult process of slashing their respective budgets. Iraqand Iran, which are also both major oil producers outside of the Gulf region, have likewise been forced to cut annual spending going into 2016.

For every dollar lost on a barrel of oil, Saudi Arabia losses billions from its annual budget, which needs the price of oil to be $96 a barrel to break even, according to a 2015 economic analysis by the International Monetary Fund. In comparison, the Kingdom’s regional rivals require much less: Iran needs $70 per barrel, while its fellow Gulf States of United Arab Emirates, Qatar and Kuwait need $68, $58 and $52, respectively. While some analysts claim oil’s price could recover by the end of year,others say there’s room for it to fall further, potentially hitting $20 later this year before rebounding over the next five years.

But that’s hardly consolation for countries in the Middle East whose economies almost exclusively rely on oil to help subsidize health, education, housing and other costs for social welfare programs, not to mention their large and advanced militaries which were established when oil prices were high. While analysts are not sure what parts of government spending will be hit the hardest in Saudi Arabia, projections by the IMF that the country could be bankrupt within five years certainly mean the days of spending tens of billions on U.S.-built fighter jets are all but finished.

The main reason for the decreased price of oil is because producers in the Middle East are pumping too much into the market. On the surface, that may seem like a major mistake that directly hurts Riyadh, but the concerted strategy led by Saudi Arabia is aimed at preventing Iran from reemerging as a major political and military player in the region after years of being under heavy U.S. economic sanctions, explained Ariel Cohen, a senior fellow with expertise in global energy at the Atlantic Council, a Washington, D.C. think tank.

“The Saudi policy of keeping the spigots open and keeping production up is really just for geopolitical reasons, despite the damage to its economy,” said Ariel Cohen, a senior fellow with expertise in global energy at the Atlantic Council, a Washington think tank.  “The center of their thinking is about efforts to constrain Iran, and the dynamic that is driving that Saudi oil policy is the sectarian rivalry between the Sunni Saudis and the largely Shia Iranians.”

Riyadh’s bet on over-producing oil to work against Iran came at a time when China began moving from an export-driven economy fueled by Middle Eastern oil to a more sustainable consumer economy, like the United States. In short, China needs less oil than before and that hurts oil-based economies.

Between June 2009 and October 2014, when oil prices were nearly always in excess of $100 per barrel, Gulf States began substantially expanding their militaries. In 2012 alone, the Gulf countries spent nearly $100 billion on weapons, compared with Middle East rival Iran’s $10 billion, according to a report by CSIS.

One deal that probably best underscores Saudi Arabia’s rise and current fall in military spending power in the region is when Riyadh dropped a cool $30 billion in late 2011 on advanced jets and helicopters. However, more than five years later Saudi Arabia finds itself squabbling this week with the Pentagon over a $4 billion deal for seven Lockheed Martin-made warships. Riyadh prefers a price closer to $3 billion.

It’s the first example of a Saudi Arabia that is being forced to tighten its belt, according to Shashank Joshi, a Middle East expert at the London-based military think tank, the Royal United Services Institute.

“The huge rises seen in military defense spending over the last 10 years is totally unsustainable, especially for Saudi Arabia, whose leader is setting out very ambitious programs of state economic reform recently that is aiming to help the country ride the poor price of oil,” he said.

The Ripple Effect on the U.S. Defense Industry

Because most weapons sold in the Middle East come from the U.S., a reduction in spending is almost certainly going to hurt American defense manufacturers. While the stock prices of the top U.S. defense companies are holding firm, that might change in the immediate future as orders from the Middle East start to dry up, according to Dakota Wood, a U.S. defense expert with the Washington, D.C.-based Heritage Foundation.

“It really could have an impact because these petro-economies derive their primary source of income from oil and use that money to buy U.S. weapons,” said Wood. “I think we’ll see some changes fairly quickly, within six months to a year, because all of these countries are selling oil far below the break-even point and that won’t be sustainable for much longer.”