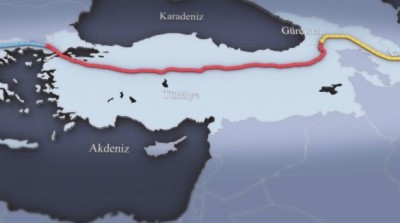 Turkish state pipeline company BOTAS is in talks with the European Investment Bank and the World Bank to borrow more than $2 billion to help finance a pipeline that will carry gas from the Caspian to Turkey and Europe, people with knowledge of the situation said.

The company, formally known as BOTAS Boru Hatlari ile Petrol Tasima AS, is in advanced talks in coordination with Turkey’s Energy Ministry, the four people said, asking not to be named because talks are private. Luxembourg-based EIB, the European Union’s lending arm, may sign a facility of around 1 billion euros ($1.07 billion) and the Washington D.C.-based World Bank may lend $1 billion, three of the people said.

Botas, which operates a local and international network of crude and gas pipelines in Turkey, will use the loan to finance its share of the construction of the 1,850-kilometer TANAP pipeline, planned to start pumping an annual 6 billion cubic meters of gas to Turkey from mid-2018. TANAP will supply Europe with 10 bcm of gas annually from 2020 through the Trans Adriatic Pipeline project linking Turkey to Italy via Greece. It’s 58 percent owned by State Oil Company of Azerbaijan, while BOTAS holds 30 percent and BP Plc 12 percent.

Both loans will be long-term as the maturities are still being discussed. The loans will probably have guarantees from the Turkish Treasury, the people said. The lenders are in due diligence with the Ankara-based pipeline project company TANAP, they said.

BOTAS declined to comment on the loan plan while e-mailed questions by Bloomberg seeking comment to the World Bank weren’t returned. EIB confirmed it was in talks for a potential loan, without giving more details.