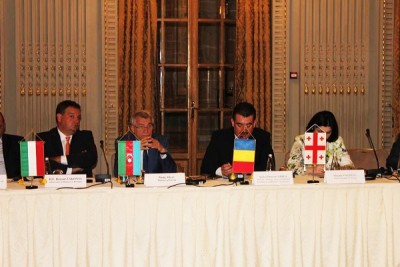 Azerbaijani government does not consider Azerbaijan-Georgia-Romania-Interconnection (AGRI) project a priority at present, Azerbaijani Energy Minister Natig Aliyev said at a briefing in Baku.

“Azerbaijan is not the initiator of the project, but we are directly involved in discussions and research. The main issue remains unsolved at this stage – who is going to invest into AGRI infrastructure and who is going to build the liquefied gas terminals in Georgia and Romania. Although SOCAR does invest capital abroad, the company’s possibilities are not unlimited,” Aliyev added.

He also added that Romania will not be able to implement this project on its own territory on its own.

“There is no driving force for the AGRI project implementation at present, but I do not consider this as a priority at this stage. Meanwhile, in the future the situation could change,” Aliyev added.

The shareholders of AGRI project are SOCAR, Georgia COGC, Romanian Romgaz and Hungarian MVM, which established AGRI LNG Co company in January 2011. The share of each company in AGRI LNG Co is 25%. The chairman of Board of Directors of AGRI is SOCAR.