As President Vladimir Putin tries to restore Russia as a major player in the Middle East, Saudi Arabia is starting to attack on Russia’s traditional stomping ground by supplying lower-priced crude oil to Poland. 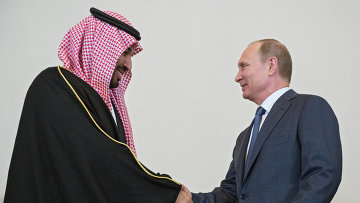 At a recent investment forum, Igor Sechin, chief executive of Rosneft, Russia’s biggest oil company, complained about the Saudis’ entry into the Polish market. “They’re dumping actively,” he said. Other Russian oil executives are worried, too. “Isn’t this move a first step toward a redivision of Western markets?” Nikolai Rubchenkov, an executive at Tatneft, said at an oil roundtable Thursday. “Shouldn’t the government’s energy strategy contain some measures to safeguard Russia’s interests in its existing Western markets?”

European traders and refiners confirm that Saudi Arabia has been offering its oil at significant discounts, making it more attractive than Russian crude. And, even though most eastern European refineries are now technologically dependent on the Russian crude mix, Russia’s oilmen are right to be worried.

In the 1970s, Saudi Arabia sent half of its oil to Europe, but then the Soviet Union built export pipelines from its abundant West Siberian oil fields, and the Saudis switched to Asian markets, where demand was growing and better prices could be had. The Saudi share of the European crude market kept dropping; in 2009, it reached a nadir of 5.9 percent. Russia’s share peaked at 34.8 percent in 2011. In recent years, Saudi Arabia slowly increased its presence, reaching a 8.6 percent share in 2013, but it had never tried its luck in Poland.

Like most of central and eastern Europe, Poland has long been a client of Russian oil companies. Last year, about three-quarters of its fuel imports came from Russia, with the rest from Kazakhstan and European countries. Poland, however, is at the center of efforts to reduce the European Union’s dependence on Russian energy. Since Putin annexed Crimea from Ukraine last year, Poland, Ukraine’s neighbor, has increased military expenditures and other efforts to shore up its security. It’s working with its smaller neighbors, too. On Thursday, it announced an agreement with Lithuania, Latvia and Estonia to build a natural gas pipeline to and from the Baltic States, ensuring their future independence from Russian gas supplies.

In this context, a new and reliable supplier is a godsend. As for the Saudis, they need to expand outside Asia where demand is falling.

The Kremlin and Russian oilmen have long sensed Europe’s appetite for energy diversification and have sought new markets. Until the 2000s, almost all Russian oil exports were to Europe. By last year, that share had shrunk to less than two-thirds: 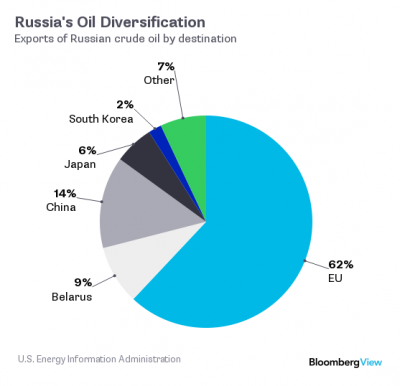 In the Asian markets, Russia became a serious competitor to the Saudis. In May, Russian crude supplies to China even temporarily surpassed those of Saudi Arabia. Now that the Saudis are involved in a ruthless price war for market share — not just with U.S. shale oil producers but with all suppliers who are not members of the Organization of Petroleum Exporting countries — they are moving into Russia’s traditional market.

This could turn into a more active shoving match between the world’s two biggest oil exporters, which already are at odds over the Syrian conflict. So far, OPEC and the International Energy Agency predict modest demand expansion next year, but if the Chinese economy continues performing worse than expected, that market may become too small for the Russians and the Saudis. Both economies are oil-dependent and retaining market share is a matter of survival.

Oil competition is a dangerous undercurrent in Putin’s Middle Eastern policy. The Russian leader hopes that when its ally Iran re-enters the global oil and gas market, Russia will somehow share in the profits, perhaps through new pipelines across Syria. He also wants to stop the Saudis from establishing export routes in Syria. Now that Russian energy supremacy in Europe also is at stake, Putin’s determination to resolve the Syrian conflict on his terms can only grow.