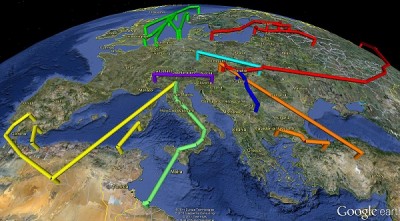 Oct 13 French utility Engie’s gas transport business GRTgaz plans to create a link from Switzerland to France that will allow Algerian, Libyan and Azeri gas to be shipped to northern Europe via Italy in coming years.

GRTgaz already has a connection, in Oltingue, which carries gas from France to Switzerland and has the capacity to transport more than 220 gigawatt-hours (GWh) of gas per day.

It is now investing in the link to carry gas in both directions, and when the new infrastructure is operational in 2018 it will be able to transport 100 GWh per day from Switzerland, with the possibility of adding another 100 GWh of capacity later, GRTgaz said on Tuesday.

“The new import capacity at Oltingue will improve security of supply in Northern Europe and will connect the French and Italian markets in the south-north direction,” said GRTgaz, which gave no financial details about the planned investment.

From 2020 the Trans Adriatic Pipeline (TAP) is expected to ship Azeri gas to Europe via the networks of Italian gas transport operator Snam, which will build 400 km (248 miles) of pipelines across Italy to be able to ship African and Azeri gas to Northern Europe.