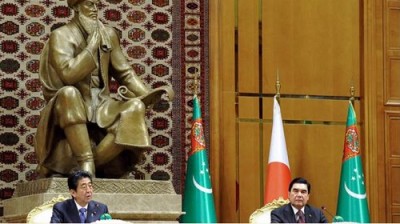 Shinzo Abe is on a whirlwind tour of Central Asia in an attempt to drum up business for Japanese companies and counter China’s growing influence in the region.

Japan’s prime minister received an honorary doctorate in Turkmenistan and opened a new opera house in Uzbekistan before arriving in the Kyrgyz capital Bishkek on Monday.

Mr Abe’s visit — the first to post-Soviet Central Asia by a Japanese leader in nine years — comes as Beijing promises to step up investments in the region through its New Silk Road policy.

“They are afraid that in the future China will be the main player here,” said Dosym Satpayev, a Kazakh political scientist who heads the Almaty-based Risk Assessment Group.

Mr Abe has made exporting infrastructure to fast-growing Asian markets a centrepiece of his economic strategy, but he has struggled to close deals given China’s willingness to offer no-strings finance and rock-bottom prices.

Japanese industry was cast into a bout of gloom by Indonesia’s recent decision to go with China for a high-speed rail line. The nuclear sector is aghast at Britain’s decision to build a nuclear power station with Chinese technology, fearing it will act as a reference plant for China to go after the global market.

Central Asian governments, struggling with the fall in commodity prices and recession in Russia, are likely to welcome the prospect of Japan’s increased interest. The speaker of Mongolia’s parliament on Thursday told Mr Abe that he considered Japan to be the country’s “third neighbour”.

But Central Asian businesspeople and analysts are deeply sceptical that Japan can provide a meaningful counterweight to China, which has invested heavily in natural resources and infrastructure over the past 15 years and is now the region’s largest trading partner.

While Japan has long been a major donor of development aid to the region, its economic ties are relatively limited. Inpex, the energy company, holds a stake in Kazakhstan’s large but troubled Kashagan oilfield, and Japanese companies have won contracts to build processing plants in the oil and uranium sectors.

“I’m very sceptical about possibilities of co-operation between Japan and Central Asia,” said Luca Anceschi, a specialist on the region at the University of Glasgow, arguing that geographical barriers and the poor investment climate in region will hamper Mr Abe’s push.

One senior Kazakh executive who has worked in Japan describes Tokyo’s Central Asia policy as “a real mess”. He points to the competition to build Kazakhstan’s first nuclear power plant, saying that Japanese companies were involved in several different bids.

“This is exactly why the Chinese are more successful. It’s much more straightforward. They put forward one Chinese bidder, funded by Chinese banks with sovereign guarantees,” he said.

Mr Satpayev adds that Chinese and Russian groups are more accustomed to navigating the corruption endemic to the region. “China can work with any corrupt political elite — Japan has some problems,” he said.

Mr Abe is visiting the region with an entourage of about 50 Japanese banks, trading companies and universities, announcing billions of dollars worth of joint projects, although people familiar with some of the deals said they were still far from binding contracts.

He and Turkmen president Gurbanguly Berdymukhamedov signed agreements to co-operate on projects which they said were worth $18bn, although few details were available.

Japanese companies are proposing to construct, but not own, plants around the giant Galkynysh gasfield. Those could include an $8bn gas processing plant, a $4bn chemicals plant using natural gas as feedstock and a $2bn facility to produce urea for use in fertiliser. The consortiums include trading companies such as Mitsubishi and Itochu as well as plant engineers such as JGC and Chiyoda.

In Uzbekistan, Mr Abe announced $8.5bn of joint projects, including a contract for Mitsubishi Heavy Industries and Mitsubishi Corporation to construct a $1bn fertiliser plant.

Mr Abe has engaged in frantic travel whenever parliament is out of session, with the dual aim of boosting Japan’s economy and offsetting the growing influence of China, although Central Asia is relatively late in getting a visit.

“It will develop our links with the various countries,” said chief cabinet secretary Yoshihide Suga. “Japan has helped in the building of these nations and we want to spur that on.”