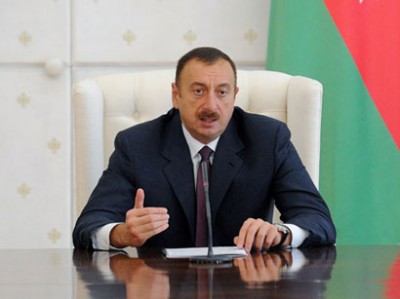 Azerbaijan is fully convinced that the project for the Southern Gas Corridor will get realized and thus the construction of a new gas pipeline from Azerbaijan to Europe will be ensured, said Azerbaijan’s President Ilham Aliyev.

He made the remarks addressing a press conference held with the Czech Republic’s President Milos Zeman on Sept. 15.

The president noted that the ties between Azerbaijan and the Czech Republic develop successfully and there are excellent results in the political, economic and cultural spheres.

“Today, we widely and sincerely discussed the various aspects of our relations and we once again see that there is no obstacle to deepening the bilateral cooperation,” he added.

On the contrary, said President Aliyev, the ties of partnership and friendship have emerged between Azerbaijan and the Czech Republic.

“The declaration on strategic partnership, signed today, is a clear evidence of my words,” the president added.

He also noted that the declaration is a serious political document.

“It reflects the level, the significance of our bilateral relations, and it has indeed elevated our ties to the level of strategic partnership,” said the president. “We have seven similar contracts, agreements, and declarations with the EU member countries. Azerbaijan has already signed documents on strategic partnership with eight EU member countries.”

He added that the strategic partnership declaration reflects various aspects of ties between Azerbaijan and the Czech Republic.

President Aliyev also said the declaration at the same time reflects the essence and the ways to solve the Armenia-Azerbaijan Nagorno-Karabakh conflict, which is the most painful problem for Azerbaijan.

He said the declaration shows that the Armenia-Azerbaijan Nagorno-Karabakh conflict should be solved on the basis of the UN Charter, the corresponding resolutions of the UN Security Council, the Helsinki Final Act, the sovereignty, the territorial integrity and the inviolability of borders.

“This is the only possible settlement option. All the conflicts should be solved on the basis international law norms and principles,” he added.

He noted that Nagorno-Karabakh and seven adjacent regions, which are Azerbaijani territories recognized by international community, have been for many years under Armenian occupation.

“A policy of ethnic cleansing was carried out against our people,” said the president. “As a result of this policy, over one million Azerbaijanis have become refugees and internally displaced in their motherland. Twenty percent of our lands are under occupation, and Armenia continues this aggressive policy ignoring the calls of international mediators.”

He also said the OSCE Minsk Group’s co-chairs – Russia, France and the US, which are dealing with this issue, have on the highest level declared that the status-quo on the Nagorno-Karabakh conflict is unacceptable and should be changed.

“The change of the status-quo, of course, means an end to the occupation. We want this. International community wants this. I am sure we will achieve what we want. Azerbaijan will restore its territorial integrity, and thus the international law and justice will be victorious,” President Aliyev said.

Ilham Aliyev added that the declaration reflects other spheres as well.

“We successfully cooperate in economic sphere,” said the president. “I can say that today, we mainly discussed the economic cooperation both at the level of delegations and in the bilateral format.”

“There is a good potential here. The trade turnover is increasing between our countries,” he added.

“Meanwhile, the Czech banks allocate considerable amount of funds for the implementation of the relevant projects,” said Aliyev. “We are grateful for this, since these funds allow to implement various infrastructure projects, first of all in the transport sector in Azerbaijan.”

“We also had a broad exchange of views on this issue,” said the head of state.

“Certainly, we highly appreciate the achieved results. At the same time, we should look into the future,” he added.

Furthermore, the head of state said that the Czech-Azerbaijan business forum to be held Sept.16 will be an important event in terms of intensifying the bilateral economic cooperation.

Noting the significance of making mutual investments, Aliyev said that both the Czech Republic and Azerbaijan are very suitable countries for foreign investments.

“Foreign investments are protected at a high level,” he said. “We should try to ensure our businessmen become more familiar with each other and intensify the cooperation.”

A meeting of the [Azerbaijani-Czech] intergovernmental commission has been held recently which is also an important format, he said.

“So, I am confident that more successful results will be achieved in the economic sphere in the future,” said the president. “Nevertheless, today, I can say that the level of trade turnover can, to some extent, satisfy us.”

Aliyev said that certainly, the cooperation in the energy sphere is also discussed.

Azerbaijan exports crude oil to the Czech Republic and the Azerbaijani oil accounts for around 30 percent in this country’s energy balance, which is also very important, according to the president.

It is a large energy project with the total cost of $45 billion, he said.

“It will contribute to the second phase in the development of the Shah Deniz gas field. At the same time, three new gas pipelines will be built: the South Caucasus gas pipeline linking Azerbaijan with Georgia, TANAP passing through Turkey and TAP, a third gas project stretching from the border of Turkey to the borders of Italy,” said the president.

Together with Shah Deniz-2 project, these four major projects form the Southern Gas Corridor and Azerbaijan successfully fulfills its functions here, according to the president.

Azerbaijan participates as an investor in all these projects and as the main investor in some of them, Aliyev added.

The president further noted that although the world oil prices have sharply decreased in recent months, there are no delays in the implementation of this project and all the work is going on schedule.

Azerbaijan is fully convinced that this project will get realized and thus the construction of a new gas pipeline from Azerbaijan to Europe will be ensured, President Ilham Aliyev said.

The president added that there are good prospects for cooperation in other spheres as well.

“Especially, I would like to mention the humanitarian sphere,” he said.

The president added that there is a great interest in the Czech culture and history in Azerbaijan.

Ilham Aliyev expressed confidence that the Czech president and the delegation which arrived in Azerbaijan with him will become familiar with this sphere as well.