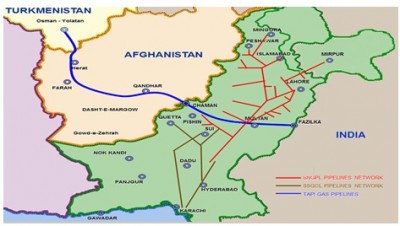 The fact that President of Turkmenistan Gurbanguly Berdimuhamedov invited Turkish companies to participate in the implementation of the Turkmenistan-Afghanistan-Pakistan-India gas pipeline is an attractive proposal, the corporation said.

“At present, Turkmenistan’s proposal is under consideration,” TRAO said.

During his visit to Turkey on August 10, President Berdimuhamedov invited Turkish companies to participate in the TAPI gas pipeline project implementation.

The basic document for the promotion of TAPI is the Ashgabat interstate agreement signed between the participating states in 2010 on starting the practical implementation of this project.

The length of TAPI gas pipeline will be 1,800 kilometers, of which 200 kilometers will run though Turkmenistan, 773 kilometers – Afghanistan, 827 kilometers – Pakistan (to Fazilka settlement on the border with India). It is designed to meet the gas demand of the industry of the countries with the population of over 1.5 billion.

The annual pumping capacity of the gas pipeline will be 33 billion cubic meters.
The project cost of TAPI is $10 billion.

The gas pipeline must stretch from the largest gas field in Turkmenistan – Galkynysh.