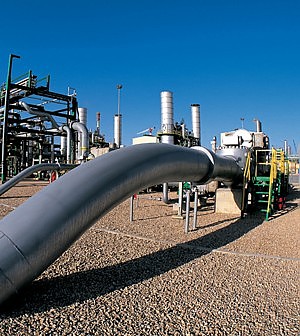 Spain has the potential to reduce Europe’s reliance on Russian gas, as its chain of LNG terminals and its gas pipelines from Africa have a combined import capacity of about 80 billion cubic metres (bcm) of gas per year, more than three times Spain’s annual consumption.

“We need to ship gas outside Spain, but there’s a bottleneck between France and Spain,” Snam CEO Carlo Malacarne said, adding that Spain could export up to 20 to 25 bcm/year.

That will more than double cross-border capacity, which now stands at 5.4 bcm/year but will grow to 7.1 bcm by the end of 2015 after an upgrade of existing pipes in the western Pyrenees.

Snam has not taken an investment decision yet on the Midcat, but Malacarne said he expects TIGF will present a capital expenditure plan to French regulator CRE next year.

“Boosting France-Spain gas interconnections is part of the European Union priorities, so it is difficult to imagine that our plan would not be accepted,” Malacarne said.

He added that French institutions were lukewarm about the Spain-France connection, although they would be unable to stop it.

Spanish gas industry officials privately complain about a lack of support for the project from France, which has no direct interest in solving Spain’s overcapacity issues. A Spanish industry source told Reuters the issue is being discussed at government level.

The two countries have been in a similar tussle about boosting electric power connections between them. After years of delay, a new cable that will double the cross-Pyrenees power capacity is set to come online this summer.

Midcat is part of Snam’s project to connect southern and northern European gas networks with a backbone of two intersecting lines that resemble a huge “X”.

Midcat would be the western part of an axis that could ship gas to eastern Europe and would connect with Austria’s Trans Austria Gasleitung (TAG) – 89 percent owned by Snam, the rest by Austrian energy firm OMV – and onward to Russia.

In an alliance with Belgian gas grid operator Fluxys, Snam is also building a north-south axis that will be able to ship Algerian and Libyan gas from south Italy to the UK.

Fluxys will upgrade its pipelines in Germany and Switzerland and connect with new pipes Snam will build in Italy.

Snam already has pipelines with combined capacity of about 45 bcm of African gas to southern Italy via Sicily, while from 2020 the planned Trans Adriatic Pipeline (TAP) will ship gas from Azerbaijan.

Ahead of TAP’s opening, Snam will spend some 4 billion euros over the next years to build 400 km (248 miles) of pipelines across Italy to connect to the Fluxys pipelines and be able to ship African and Azeri gas into Northern Europe.

By 2018, Snam and Fluxys want to have a bidirectional capacity of 6 bcm/year.

“We are working to build the best interconnection for the east-west corridor,” Malacarne said. ($1 = 0.8862 euros).